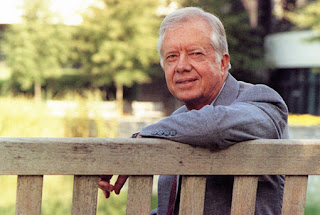 "I think an overwhelming portion of the intensely demonstrated animosity toward President Barack Obama is based on the fact that he is a black man," Carter said. "I live in the South, and I've seen the South come a long way, and I've seen the rest of the country that share the South's attitude toward minority groups at that time, particularly African Americans."

Carter continued, "And that racism inclination still exists. And I think it's bubbled up to the surface because of the belief among many white people, not just in the South but around the country, that African-Americans are not qualified to lead this great country. It's an abominable circumstance, and it grieves me and concerns me very deeply."

I always loved Jimmy Carter and felt like he has gotten a raw deal in terms of his presidency. Had Raygun not reversed many of his energy policies we'd be in much better shape and a more energy efficient nation now,

Absolutely! Many can't believe this man with all this power will not be seeking revenge for slavery etc. They can't believe it because that's what they would do. There was a sign in last weekend's rally that said... Obama Plan- White Slavery.
So sad.