The NHL's Winter Classic between the Toronto Maple Leafs and the Detroit Red Wings happened yesterday at Michigan Stadium.

It was played in front of a record New Year's Day crowd of 105,591 fans who endured 13 degree temps and blowing snow that fell through the entire game at The Big House.

It was the largest crowd to ever witness a hockey game be it collegiate or professional, and the Maple Leaf fans making the five hour drive to Ann Arbor, MI went back across the border to Toronto happy after the 3-2 shootout win over Detroit. 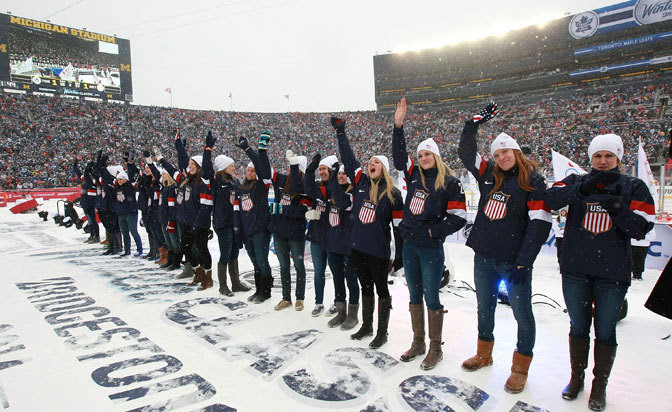 But of more importance to moi was what occurred during the Winter Classic second intermission, the  introduction of the 2014 USA Women's Olympic hockey team.   These are the 21 women who will attempt to earn our first gold medal in women's hockey since the 1998 squad did so at Nagano.

Julie Chu made it to her fourth USA Olympic squad and is one of the 11 Olympic vets on the 2014 team.  Chu is also their oldest player at age 31.  The other ten vets who join her are goaltenders: Jesse Vetter, Molly Schaus and Brianne McLaughlin-Bittle, Kacey Bellamy, Meghan Duggan, Hilary Knight, Jocelyne Lamoureux, Monique Lamoureux, Gigi Marvin and Kelli Stack.

Amanda Kessel is the sister of Toronto Maple Leafs forward Phil Kessel (who made the men's squad) and is also on this Sochi Olympic team.  While this is her first USA Olympic team, she already knows the thrill of beating Canada in international hockey competition.

The College Player of the Year, Patty Kazmaier Memorial Award winner (the equivalent of the Heisman Trophy in women's collegiate hockey) for unbeaten NCAA national champs Minnesota scored the winning goal in the IIHF championship game against Canada last April.

Amanda Kessel, as y'all found out on your home soil last year is all that and four bags of chips.

And this time a woman will be large and in charge of coaching our Olympic squad in Katey Stone.  She is the most successful coach in our NCAA women's hockey ranks as the head coach at Harvard.  She was also the head coach of the 2013 IIHF World Championship squad.

So now that our team is set, can't wait for the Olympic women's ice hockey tournament to start on February 8.  And yes Renee, February 12 is already circled on my new 2014 calendar.

That's the day we play y'all in the final Group A match in Sochi before it heads to the medal round..