Well TransGriot sports fans, this was the weekend myself and other Texans fans hoped that we'd be getting to for the first time in franchise history, but didn't happen for us.  Instead of playing for an AFC title they are rebuilding their coaching staff with Mike Munchak and Romeo Crennel the next rumored hires.

Enough Texans talk, let's get to discussing the teams that did make it to Championship Sunday in the 2013-14 NFL Playoffs.  Mike and Eli's picks will be here.

Unlike the Wildcard round in which three of the four road teams won, the script was flipped in last week's Divisional round with three of the four home teams winning.   I also got three of those four games correct, with me missing on the Carolina-San Francisco one.

So I'm now 5-3 in the 2013-14 playoffs and have the Championship Sunday games to go.   What two teams will punch their tickets to Met Life Stadium tomorrow?    Well, let's get to the picks.

This one is a rematch of a November 24 regular season game that was played at Gillette Stadium in which the Patriots won it 34-31 in overtime after trailing 24-0 at halftime.   The Patriots roared back to score 31  unanswered points on its first five second half possessions to take a second half 31-24 lead.

Manning hooked up with Demaryuis Thomas for an 11 yard TD to tie the game and send it into overtime.  After the teams traded possessions, on the subsequent New England punt by Ryan Allen it hit Denver's Tony Carter after it landed and was recovered by Nate Ebner on the Denver 13 yard line to set up the winning Stephen Gostkowski field goal for the 34-31 comeback win.

The Broncos can thank the Miami Dolphins and their 24-20 win over the Pats as to the major reason why this game is being played in Denver.

It's one more go around (the 15th time) in the battle between two future Hall of Fame quarterbacks in Tom Brady and Peyton Manning, and this time it's for a trip to Super Bowl XLVIII.

AFC West champ Denver was the best team in the AFC all year and AFC East champ New England despite all the drama surrounding the Aaron Rodriguez mess and injuries finished with the second best record in the conference and are in their third (boo hiss) straight AFC Championship game after sending the Colts parking with a 43-22 Divisional round win.   Denver won their rubber match with the San Diego Chargers 24-17 to punch their ticket into this AFC Championship matchup.

This game will come down to which team doesn't make the crucial mistake they will ponder the whole offseason.

Who will hoist the Lamar Hunt Trophy at the end of the game?   Because they are playing at home, Denver

Call Seahawks All-Pro corner Richard Sherman Nostradamus.  He predicted back in march when the Seahawks traded for Percy Harvin and the Niners matched that move with the acquisition of Anquan Boldin that both these teams would meet for a thrid time with a Super Bowl berth on the line.

He was correct, and now it's on and poppin'.

This is the rubber match of the season series between the NFC West champion Seattle Seahawks and their hated NFC West rivals the San Francisco 49ers, who are the defending NFC Champions and playing in their second consecutive NFC Championship game.

They split their regular season divisional games with the Seahawks blowing out the 49ers 24-3 at CenturyLink field during Week 2 of the season and San Francisco returning the favor with a 19-17 win during Week 14. 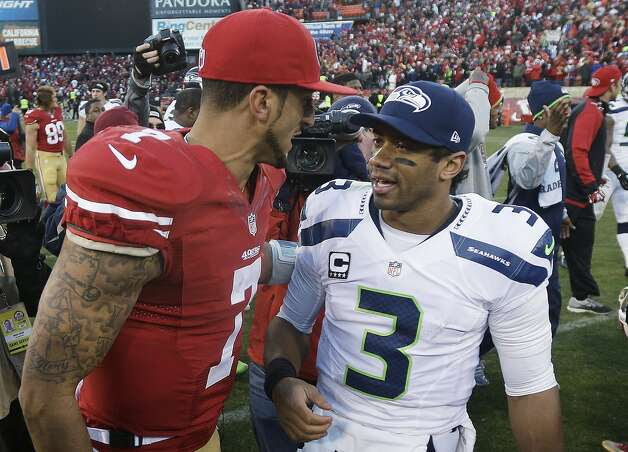 Now these two bitter rivals are playing each other in a battle that will decide who represents the NFC in the Super Bowl February 2 after knocking off their respective divisional round playoff opponents.

While Seattle had to hold off a late charge from the New Orleans Saints to emerge as 24-15 winners at CenturyLink Field, San Francisco marched into Charlotte and handed the precocious NFC South champion Panthers a 24-10 setback to set up this winner take all NFC title game. .

Just as the AFC Title game is a showdown between two future Hall of fame quarterbacks, this NFC one features two of the young guns in the league with contrasting styles in Russell Wilson and Colin Kaepernick

Both have bruising defenses, can run the football down your throat with back Marshawn Lynch and Frank Gore, and excellent coaches in Pete Carroll and Jim Harbaugh.

And the fanbases hate each other, too.

The difference in this game is going to come down to turnovers and The 12th Man.   And yep, I see Seattle taking this game and hoisting the George Halas Trophy in front of their boisterous fans.