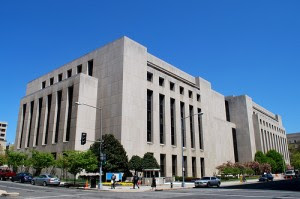 The New Year for transpeople is definitely getting started on the right foot.   CeCe is freed from unjust incarceration, and now comes word from Washington DC that the waste of DNA who brutally attacked one of our POC transsisters is about to spend time in jail for it.

Michael McBride back on October 25 had already pled guilty to a charge of aggravated assault while armed in the heinous June 21 attack in SE DC on one of our transsisters that left her hospitalized after being stabbed up to 40 times.  She suffered significant blood loss and if it hadn't been for timely medial intervention would have died as a result of it.

On Friday January 10 the 23 year old McBride faced the judicial music in the Honorable Judge Patricia A Broderick's courtroom.   He was sentenced to ten years in jail and once he gets out, another five years of supervised release and mental health services.

Is the sentence enough?   That's debatable.  But hopfully what is does do is send the message in the Distrcit and elsewhere that it's no longer open season on trans women.   I hope it also sends the message that if you attack us, you will get extensive jail time for it and not a slap on the wrist.