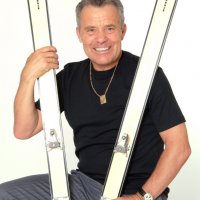 With us a month away from the start of what are sure to be the controversial Sochi Olympic Games, here's another one of my posts about Olympic and world class athletes that were embroiled in gender identity or gender related drama either during or in the runup to an Olympic Games.

We're going to jump into the wayback machine and go back to the June 19, 1948 birth in Agsdorf, Austria of Erik Schinegger.   Erik was raised as a girl named Erika who became a world championship downhill ski racer.

In 1967 because of Marielle Goitschel's and Nancy Greene's of Canada's dominant World Cup season she fell to sixth in the overall standings and relinquished the downhill title to Goitschel. 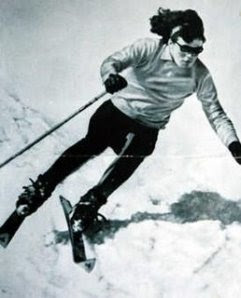 But going into the 1968 runup to Grenoble, Schinegger was considered a favorite for three Alpine skiing medals on the women's side.  But because of concerns that the Eastern Bloc nations were using disguised genetic males to compete for medals in women's international athletic competition, invasive gender testing was inaugurated starting with the 1966 European track championships and expanded to the Olympics in 1968.

Grenoble would be the first Winter Games that female competitors would have to submit to such testing, and now 19 year old Erika submitted to it along with the other Austrian skiing hopefuls as part of the formality for competing in the Olympic Games.

Doctors found only male hormones in the saliva of Schinegger, and submitted her to more rigorous scientific and psychiatric testing that led to a shocking discovery for the soon to be 20 year old who had been raised as a girl but was questioning her sexuality at the time.

Schinegger was told by IOC doctors she couldn't compete in the Games because she was chromosomally male and intersex.  After digesting and accepting the news Schinegger changed his name to Erik, went on a hormone regimen, started living his life as male and underwent a corrective surgery that revealed he had an internal penis and testicles.

"The discovery was a tremendous shock for me, my parents and everyone who knew me," Schinegger was quoted as saying. "What came afterward was an indescribable torture."

Erik set his sights on competing for Austria in the 1972 Games in Sapporo, Japan.  He trained hard for it and found himself beating many of the leading male Austrian skiers of the time but was denied a spot on the Austrian National Ski Team assembling to compete in Sapporo.

Schinegger subsequently retired from international skiing, got married twice and fathered a daughter in addition to running an inn and a children's ski school in the Carinthia region of Austria..   Schinegger also penned an autobiography entitled  Victory Over Myself and during a documentary that was filmed about his life handed his 1966 World Championship gold medal to Marielle Goitschel.