Told Y'all Some UT Fans Hated The Charlie Strong Hire 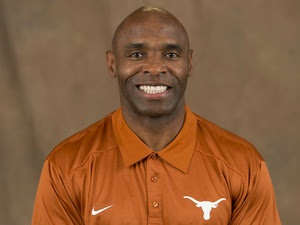 If you thought I was kidding about the less than warm welcome that greeted the news of Longhorn Elementary The University of Texas hiring Charlie Strong from some elements of their vanillacentric privileged, entitled and spoiled burnt orange wearing fanbase, well, you shouldn't be surprised.

UT megabooster Red McCombs, who has donated $100 million to UT, did his best Al Campanis impression when commenting of the hiring of the first African-American head coach for ANY UT men's sport.

“I think the whole thing is a bit sideways,” McCombs said during a  interview on ESPN 1250 in San Antonio. “I don’t have any doubt that Charlie is a fine coach. I think he would make a great position coach, maybe a coordinator.

“But I don’t believe (he belongs at) what should be one of three most powerful university programs in the world right now at UT-Austin. I don’t think it adds up.”

McCombs was lobbying for former NFL coach and ESPN football analyst Jon Gruden to get the UT job.

So tell me, how is the hiring of a coach who never had a losing record in his four years at Louisville, won a BCS bowl game, currently has a 37-15 record, won two Big East/AAC conference titles and has recruited and coached the possible number one overall pick in the 2014 NFL draft in Teddy Bridgewater a 'kick in the teeth' hire?

Says more about Red McCombs.   And naw white peeps, don't even attempt to defend what McCombs said by using Dennis Green as a shield.   Dennis Green was hired in 1992 and was already in his sixth year as the head coach of the Vikings when McCombs bought the team in 1998, and as soon as Green had his first losing season in a decade as the Vikings coach in 2001 a year after narrowly missing a trip to the Super Bowl fired him.

McCombs did apologize and walk back his comments, but McCombs is symptomatic of the arrogance I talk about in the UT fan base.  It's why I get gleeful enjoyment when their burnt orange wearing football team of four and five star recruits gets their butt kicked in Big 12 play or in bowl games..

As I said in the earlier post, Charlie, good luck brother, you're going to need it.  Going to be interesting to see if they Ty Willingham you if you have one bad season there in Austin.
Posted by Monica Roberts at 9:00 AM