What The Hell You Mean Black Bloggers Don't Talk About Politics? 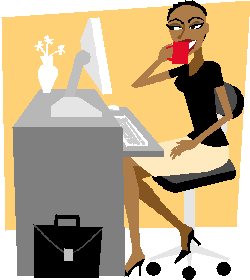 Kevin Ross pissed off me and many peeps in the Blackosphere by making the asinine statement while kissing his frat brother Tavis Smiley's behind that 'Black bloggers don't talk about politics'.

Where the hell has he been for the last few years? He damned sure wasn't at the DNC convention last year when Black bloggers such as Pam Spaulding were there in full effect to record the historic happening or checked out any of the almost 200 blogs that make up the AfroSpear.

TransGriot mostly concentrates on transgender issues from an Afrocentric perspective, and even then I have 110 posts that have the 'politics' label attached to them out of the over 1400 I've written so far.

Whether it's getting media attention for African-American kids who come up missing, injustice, disseminating information, talking about our history, shining spotlights on events across the Diaspora or what I do here in focusing attention on transgender people of color and race/class issues in the GLBT community, we play a major role in shaping the discourse that reverberates in the blogosphere and beyond.

Many African-American bloggers have built upon the historical tell it like it T-I-S is tradition of our print and radio media and structured our blogs to do the same. We not only report on the things the MSM ain't telling us, but in some cases have talked up an issue long and loud enough to where it actually begins to drive the MSM coverage as Jena 6 did. 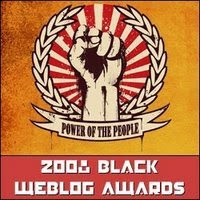 The Black blogosphere is just as diverse and innovative as its counterparts. and has its own flava at the same time.

And just like in the past, when the blogosphere's rating, awards and ranking systems didn't include us, we created our own. We have our own rating system in the BBR's, and are putting our own conferences together such as Blogging While Brown so that we can talk to each other, exchange information and get better at doing the thangs we do well.

While there are the gossip blogs, there are far more of us around the world who take immense pride in the fact that we focus on educating and informing our people and others on a wide range of issues, including political ones. Kevin Ross did us a disservice by ignorantly claiming that we don't.
Posted by Monica Roberts at 12:46 PM

Must have had too much of that Kappa punch back in the day! WTH????

Yet another reason that I'm glad not to have watched the SOBU this year (smile).

Kevin appears to enjoy being controversial. I noticed that at the BWB conference last year.

Monica, I think that your post is outstanding. I'm going to Stumble it!

Since I'm the subject of this post, I'll weigh in on the discussion. Thanks Wayne Hicks for the facebook message.

Well Wayne's right, I don't shy away from controversy. (It's the Kappa AND Morehouse College in me, just so we're clear)

At the Blogging While Brown Conference, I ended up talking about monetization of sites instead of building bridges with media that now finds itself on the ropes. Given the current economic climate, it will be interesting to see who makes this year's event in Chicago and how much sponsor support we get. Last time I checked, good intentions don't pay for airfare.

Media created by and catering to African Americans is dying. Soon the Internet and the passion of black bloggers will be the only way for us to have unfiltered conversations about us.

So given the urgency of the matter, I know I'm not doing my job unless I'm pissing people off.

That said, of course the afrosphere talks about politics. You clearly heard something other than what I articulated. Not only does my blog 3 Brothers and A Sister devote over 60% of our posts to political issues, I have TWO shows on Blogtalkradio where that's all we talk about. (Some of us do more than just write)

And my programs are the top political and currents events shows over there, black or white!

Why do you think respected bloggers from Pam's House Blend, Field Negro, Afronerd, Cobb, Hip Hop Republicans, All About Race, Black Women Vote, Dallas South, and others have been guests on my show? What do you think we're doing, playing Hop Scotch?

And with NPR News & Notes closing shop next week, some folks are spending their time being "pissed off", while others are working to get the show carried elsewhere to keep the conversation going.

There's a saying, "I like what I'm doing, more than what you're not."

That's not a dis, it's a challenge. You can either focus on me, or elevate this exchange to another level. Below is Exhibit A of where the folks I'm rolling with are trying to go. Are you in?

Kevin, I pissed you off, so I guess I'm doing my job too.

Not bad for somebody that 'doesn't talk about politics' huh?

He should be embarrassed to make a statement like that when he knows the opposite to be true. Jena 6, the DNC exclude-black-blogger madness, dunbar village...those are just the national issues - many of us have affected change in our communities.

All of us got the Tavis Smiley invites but chose not to participate because it didn't pass the smell test. This has been blogged about extensively. Reminds me of the whole thing where Tavis threw a fit because President Obama was trying to win an election and not come validate his conference.

It's not a money or attention thing either, most of us doing just fine on both accounts.

One more thing - don't put that on Morehouse either. As a honors graduate of the school, that aspect you are speaking of is from a few graduates that couldn't balance their ego as well as they did their book studies. It's not even a Kappa thing, as there are many examples of Kappa brothers that are doing big things without a lot of chest-pounding.

The blog world is a big tent and therefore all types of opinions will come to light - how we choose to use that light can be a blessing or a curse to our communities.

Mike,
Thanks for stopping by. Next time I'm in Dallas visiting my relatives we've got to chat ;)

We don't talk about politics? Really? When this sudden void show up among black bloggers? I read a wide spectrum of political thought written by black bloggers daily.

Deborah,
Amen..For some of us politics and blogging are a symbiotic relationship.

Thanks for stopping by and feel free to do so more often.