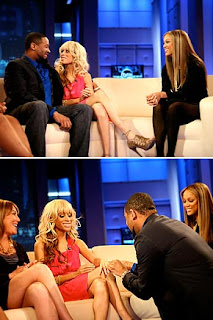 When we last checked in with little sis Isis, she was just coming off an appearance on The Tyra Banks Show in which we were introduced to her mom, she got to confront one of her ANTM Cycle 11 tormentors Clark, and she was surprised with the announcement from Tyra that she was paying for her SRS as she introduced her to Dr. Marci Bowers.

In the Tyra show being broadcast on Monday, Isis is sporting a new blonde look, she will talk about her SRS, the changes in her life and introduce us to her boyfriend Desmond.

There will also be another surprise for Isis on this show, a marriage proposal

So set the TIVO's peeps. This should be interesting.
Posted by Monica Roberts at 4:09 PM

OT, I just wanted to say hi.Didn't know you had a radio show.You know people like us got to stick together,P-Funk fans.Had a malware problem, now I can post here.Take care sis.

Thanks, was wondering what happened.

Hmm...not totally feeling that blond, maybe it's just the style. Ah well. But that on air proposal looks really sweet, I hope I even still get Tyra just to see it.

All the jealous ladies raise your hand. *PinayTG raises her hand.* :) :P

Yep PinayTG,
I'll have to join you in the 'green with envy' club. ;)

Nuts, missed it anyway...did anyone happen to catch it?

TR,
Check YouTube. Somebody had enough time on their hands to upload the show.

She is looking gorgeous and her boyfriend -- excuse me, fiance! -- is hot! Go Isis!