A New Page in the History of Civilizations 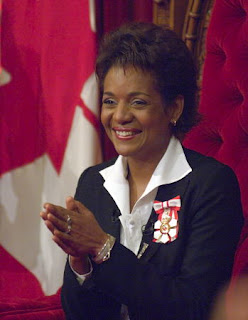 by Her Excellency Michaëlle Jean
From Citizen Voices.gg.ca
February 6, 2009

I have always thought that this time of reflection—every February—on the struggle of Blacks to gain their emancipation had no value unless viewed through the lens of the history of humanity itself, giving it its full universal dimension.

I believe that the same is true for the struggle of women, of Aboriginal peoples, of gays and lesbians for the recognition and respect of their human rights. These are but a few examples, for the list of struggles throughout history against all forms of discrimination that poison our life in society is very long. The voice of the oppressed and excluded is necessary because it stirs our consciences, forces us to re-examine how we think, allows us to take stock of how far we have come and to identify all that still needs to be done if we are to build a more fair and more human world. 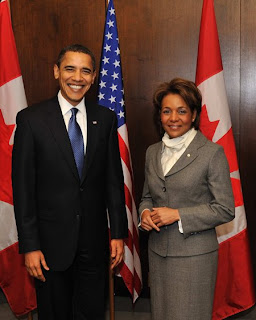 This year, Black History Month is marked by an occasion of particular historic significance—the election of the first African?American president of the United States of America. On January 20, when President Barack Hussein Obama was inaugurated, I declared that a new page in the history of civilizations was being written before our very eyes. How could we not rejoice in such a monumental change in a country that had built its prosperity on the shameful practice of slavery and endorsed centuries of systemic segregation and racism, which ended only recently? The global resonance of this event speaks to its universality. Like the dream that the Reverend Martin Luther King expressed so passionately and with such conviction in 1963. Like the release and election of Nelson Mandela, which signalled the end of apartheid in South Africa. The entire world celebrated those moments and recognizes in them turning points in the long march to equality. Barack Obama’s words of hope derive their strength from that ability to bring people together across every barrier, be they racial or otherwise. His “Yes We Can” reminded people that anything is possible and invited individuals and entire populations to join together, to believe in their power to act, and to redefine the world.

On January 20, Rideau Hall hosted a Youth Dialogue, attended by more than 100 youth from every walk of life of our rich Canadian diversity. Together, we watched the inauguration ceremony of the 44th American president, and the discussion that followed was incredibly revealing. The energy was palpable; the call to civic engagement, to take action, to cast off apathy and indifference swept through the room, and it was amazing!
Posted by Monica Roberts at 12:37 PM

I'm ashamed to say that I had not seen that already. What an inspiring speech! I love the third paragraph especially. Thanks for posting this!

i'm sorry for leaving this is a posted reply, but i am apparently blind, and cannot find a place that has other contact info.

i have just found your blog (and i adore it. i thought i was the only person in the world who still loved Jasmine Guy!). and i have an issue, its actually a very large painful mess. i was used to hurt a transwoman friend of mine. and while it is not your job, i was hoping you might be willing to dispense some advice for me? i am totally cis-gendered (i think i am the only straight woman i know...) and i know i don't completely get all of the issues that are in play.

if this is totally out-of-bounds, please forgive and delete the post. but if you think you might be able and are ok with trying to help, could you please email me?
denelian at yahoo dot com

either way, i hope its okay if i come and read your blog. you have a gift for drawing in the reader, so that i can almost believe that i am reading my *own* thoughts, if that makes sense. and, after what happened with my friend, i am ashamed that i don't know more than i do.