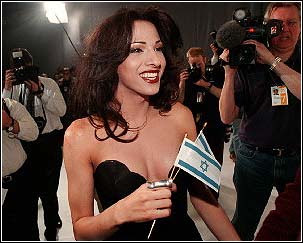 When you mention the nation of Israel, you think about it in the context of the major world religions of Christianity, Judaism and Islam and the holy sites for those religions contained inside its borders.

Scenes from Jerusalem and ultra modern Tel Aviv come to mind along with the seemingly endless cycle of violence that underscores the ongoing search for peace in this part of the world.

But until May 1998, the word transgender and Israel was something that you didn't think was synonymous. Then a transwoman named Sharon Cohen won the Eurovision song contest that launched the career of Swedish pop group ABBA and became an international transgender icon known as Dana International.

Greenberg wears two hats as the transgender representative sitting on the national board of The Aguda, an association representing Israel's GLBT community that has been in existence since 1975. She's also the coordinator of the political lobbying group that represents the various organizations in Israel transgender community.

She's a post-op fighting for Israel's transgender people to have the ability to change their identity cards without undergoing surgery, and just like everywhere else on the planet, to have laws put in place to combat employment discrimination.

But despite the discrimination that transgender people face, Israel is considered the most tolerant country in the Middle East towards GLBT people. It's that tolerance that Israeli transpeople are banking on in addition to their emerging sense of community to create lasting change that allows them to contribute their talents to Israeli society.
Posted by Monica Roberts at 3:30 AM