Seeing how well it worked for Felicity Huffman to play a transwoman in the movie Transamerica, Oscar winning actress Nicole Kidman is now going to do so in an upcoming indie film called the Danish Girl, based on David Ebeshoff's fictionalized account of the relationship of Elbe and wife Gerda, who will be played by Oscar winner Charlize Theron. But for us transpeeps, Lili is considered the pioneer. She was born Einar Wegener in 1886 and met Gerda Gottlieb while they were students in a Copenhagen art school.

They settled in Paris in 1912 and worked as illustrators, with Einar focusing on painting landscapes while Gerda finding commercial success focusing on books and fashion magazines. Lili's body type also allowed her to pass quite easily as a woman, which she did from 1910 onwards.

When one of Gerda's models no showed, she asked Lili to fill in to great success. Gerda then continued to use Lili in a series of paintings as her model. Sometimes she was dressed in high fashion clothes, other times in the nude. 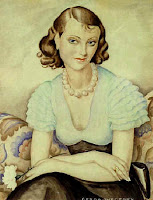 Beginning in 1930, after Lili's examination by Dr. Magnus Hirschfeld, she underwent an experimental series of operations in Berlin to finish her transformation to woman. She had an ovarian transplant performed in the second surgery, but after she experienced severe abdominal pain, had emergency surgery to remove them. She died in 1931 as a result of complications from that failed transplant and is buried in Dresden, Germany.

It's going to be interesting to not only see this piece of transgender history come to the silver screen, but see Nicole Kidman playing a transwoman as well.

Looking forward to seeing this movie when it finally comes out.

I think it might be nice to see an actual trans person play a trans person or even GASP! a gay person play a gay person (Milk, I'm looking at you), but I must accept that it's a Hollywood movie and Hollywood is just about dollars and cents. If I want to see transpeople telling their own stories, I will just keep up with all the great documentaries and articles you recommend!:)

Camile,
It would be nice if Alexandra Billings, Calpernia Addams, Candis Cayne or Aleshia Brevard were actually playing this role.

The reality of Hollywood is that money and star power gets movies made, even indie ones.

I am sooo not looking forward to Kidman playing this role. (plus, how many really successful films has this woman made... not many??) The book they're basing it is fiction and quite different than the real history. *snif-snif* Schlock is in the air.

I always learn something reading your blog. As I mentioned I though the first western trans woman was someone else. I am very much looking forward to seeing this and learning more. The only caveat I have is that once again they did not select an actual trans woman to play the part. I know that they want commercial success but if they continue to forgo giving trans women acting opportunities there will never be a commercial success.

Gina,
Let's not conclusion jump either. They could also do a bang up job on it as well.