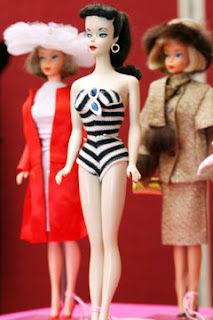 Happy 50th birthday to Barbara Millicent Roberts. Even though we share the same last name, we aren't related. On top of that, Barbara's plastic and way shorter than me at only 11.5 inches tall.

Today is the 50th birthday of the most popular toy line ever conceived, the Barbie doll. Mattel has sold over a billion dolls since it was introduced at the New York Toy Fair on this date in March 1959. I can vouch for that since I own nine of them in various skin tones plus one that honors a certain sorority that has salmon pink and apple green colors.

Of course, since this was the 50's, the sistah Barbies didn't debut until 1980, but they did produce an African-American Christie doll starting in 1968 that was Barbie's girlfriend. But once they debuted, those sistah Barbie's eventually encompassed the rainbow of skin tones prevalent with African descended women over the years. Latina and Asian versions were produced along with a line of Barbies that wore various national costumes. 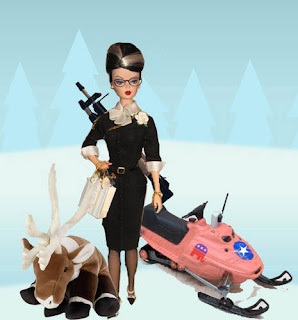 Barbie was also ahead of the curve in terms of depicting women performing various jobs in society.

An astronaut Barbie was sold in 1965 despite the fact the first US woman in space didn't happen until the shuttle program blasted off in 1979. Barbie's also been an airline pilot, flight attendant, ballerina, teacher, gymnast, skater, NASCAR driver, WNBA ballplayer, cowgirl, a cheerleader for various colleges, politician (stop snickering), doctor, surgical nurse, a member of all branches of the military and Dallas Cowboy cheerleader.

As part of the US bicentennial celebrations in 1976 there's even a Barbie that was placed in the time capsule that will be opened in 2076 for the US tricentennial.

'Barbie doll' has even become a part of our lexicon, humor, academic and general societal discourse. Ask anyone who majored in women's studies and a certain Alaska governor about that. 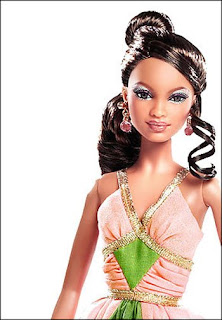 She has even joined a sorority. Last year a collectors Barbie was created for Alpha Kappa Alpha Sorority, Inc. in honor of their centennial celebration last year. It was the first Barbie that Mattel had created that honored any sorority, Black or white. The AKA Barbie also has the distinction of being the first doll created to honor any historically Black organization as well.

Of course, Barbie has always been synonymous with fashion, as witnessed by the various collector Barbies that sported clothes designed by Bob Mackie and Byron Lars and the runway event held during New York's Fashion Week last month as part of the Barbie 50th anniversary celebrations.

So Happy Birthday to a timeless and iconic slice of childhood, the Barbie doll.
Posted by Monica Roberts at 11:01 PM

I'm a single parent of a daughter. We had a "no Barbie, no Bratz" policy in our house and I think my daughter was all the better for it. Furthermore, I'm a transwoman who was somewhat feminine as a child. Never played with Barbies (except to help Kathy, a friend of mine from around the corner, torture her Barbies as most girls do). I always think it's funny the way adults idealize how children play with Barbie, which, in reality, usually consists of contorting/removing her limbs, forcing her to do gross acts with Ken (or other Barbies) and throwing her in a pile somewhere. Instead I collected and played with stuffed animals (being a total anthropomorphizer, I still talk to them!?). I had 18 of them and they all slept with me in bed. Yaay, chubby, soft stuffed animals... boo anorexic, plastic Barbie!

Gina,
I own 9 Barbies, all Black with varying shades, hair colors and skin tones, including the AKA one.

There's a GLBT coffeehouse here that used to have three Barbies that had their hair cut in Mohawks. The only non mohawked Barbie was the pre-op one that had a mini penis glue between her legs.