We are the Rad Fem Borg. Lower your intellectual shields and surrender your brains. We will add your biological and feminist distinctiveness to our own. You will adapt to hating transwomen just like us. Resistance is futile.

In my 'Ain't Feelin' Feminism' post one of my commenters remarked that the anti-transgender sentiments that drive some of the radical feminist movement had subsided, to which I dissented on that point.

While I had in the back of my mind the things I'd read on the Questioning Transphobia blog about rad fem bloggers still stuck in the 70's, we got fresh indications that the transphobic infection of idiocy has been implanted into new rad fem drones. 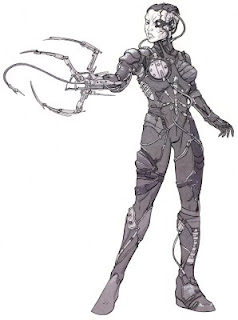 One was even dispatched to Womanist Musings recently to attack the esteemed editor of that blog because as a trans ally, Renee politely asked for her post to be removed from a rad fem blog carnival that turned out to be an anti-transgender hatefest.

The rad fem hatred of transpeople continues with a post that rad fem transhater Margaret Jamison wrote because Renee called the Nicky drone out concerning a transphobic comment this person left on a post she wrote on intersex tennis pro Sarah Gronert. Nicky then ran to her space and tried to claim that Renee was 'rude' to her.

Renee exercised her right as the owner/editor of the blog to call out the transphobic comment, and because Nicky got smacked down, she's exercising her white privilege to claim that Renee was 'rude to her.' 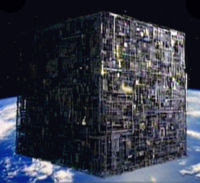 You know, I'm beyond sick of the deluded transphobic hatred expressed by some rad fems, some gays and lesbians and some intersex people being spun as 'truth'. When you call them out on it, they hop in their Borg cube and run back to the collective at warp speed and whine on their blogs we're being 'rude', especially if you're a POC calling them out. And just like right wingers, they attempt to falsely project their nekulturny behaviors onto the transgender community and claim we're engaging in it.

You don't deserve civility when you are colluders aiding, abetting, and enabling the attitudes that result in transgender people being discriminated against or killed, disrespecting the real life experiences of transpeople and come into our spaces and the spaces of our allies to express your anti-transgender hostility.

Resistance to the disco era thinking of the rad fem collective is not futile.
Posted by Monica Roberts at 3:40 PM

The remind me of the sand people in star wars. They're easily startled/offended but they always come back and with their friends.

And we'll have light sabers and blasters ready when they do. ;)

As far as I know Nick(y) self identifys as male. And he is not a drone of radical feminism. His hatred is based on the medical abuse done to him because he is intersexed. To him justified partly because those is done to prevent intersex people to become transsexuals. So instead of hating the opressors who did that to him because of a false claim from John Money he firmed the other way arround, advocation Moneys way to target the easier prey.

Thanks for the additional info

That still doesn't justify Nicky coming onto anyone's blog and spreading his transhatred, and getting a 'tude when he gets called on it.

I'm getting a little sick of this 'hate the transpeeps' meme with some intersex people, think they can spew that crap with impunity and not get called on it.

He trolled my blog a couple months ago. He likes to build up an army of sockpuppets to support him, too. But his posting style is so distinctive that he's almost always instantly identifiable.

I don't hate him, but he makes me so damned tired.

Also, I think he's a person of color.

Your point about the borg collective is well taken, though - look how things went down when Margie Jamison attacked little light on her blog, got shut down, and ran back to her own blog to mock little light for having a voice. :(

What is with the haters who can't be bothered to read before posting?

And Kenneth? That was directed at you, just so you know. Did you even read the post, or were you just hanging out and waiting for an opportunity to insult first, and ask questions later?

I wrote a response to her commentary over at womanist musings. The cowards that they are the delete any comment pointing out their transphobia over at aroo. If there points were really anything more than hateful screed they would be able to stand up to critique.

Between the well-documented racism and the transphobia, it seems the Rad Fem are as bad as the Gay Mafia.

Damn! I have a virus or something. Evertime I click on a link I get rerouted to strange webpages. Hence, I've been out of the loop.

1) people should really learn that hate makes them ugly. it's not sexy.

2) politics and political strategy grow and evolve, if you're spouting the same (transphobic bullshit) ideas that you were 30 or 40 years ago without any new nuances then you are damn near irrelevant...especially when more complex arguments have been brought to the table. please step your game up.

3) its always uplifting to wake up, turn on the computer and find WOC standing together to kick ass and take names of the haters and wannabes.

I'd have to learn a new language to speak to them anyway. Here goes:

@Renee,
As we know, they don't want dialogue, they want monologue.

Ask them questions - always ask. "They" can't stand that.

Eww!! They are so pathetic beyond belief.

*shakes head and walks away*

Bint,
That they are. The sad part about it is that they don't care they're on the wrong side of the moral universe.