The cast, producers and writing team said we'd be blown away by the finale, and we weren't disappointed. After four seasons of twists, turns, a million light year journey across the galaxy, and one final climactic battle, the journey ends at a shining planet called Earth after a final FTL jump from the proud warship breaks its back to where it can never jump again in the solar system of a habitable planet.

Hmm. Life here began out there. 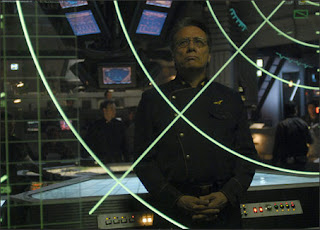 Like 'errbody' else who is a Battlestar Galactica fan I took a break from all the NCAA basketball games on the tube and checking out how accurate my predictions were for the 2009 version of the tournament to use the big screen TV to watch the final episode of the show. All of the loose ends were tied up and a few surprises were thrown into the mix as well. 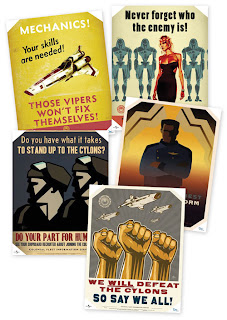 Still it was sad to see Laura die even though we all knew it was going to happen at some point. Seeing all the backstory flashbacks with the various characters was nice and how cool was the scene in which the Galactica and the entire spaceship fleet that got them to Earth were sent hurtling toward the Sun to the tune of the original Battlestar theme song.

While this is the end for the regular series, we still are about to be treated to a possible movie, the upcoming Caprica series, and the Battlestar Galactica story in miniseries format from the Cylon point of view just before the fall of the Colonies.

The Battlestar story isn't going to die, it's multiplying. And that's fine with me.
Posted by Monica Roberts at 7:15 AM

I was quite pleased with the finale myself.

I wasn't disappointed either