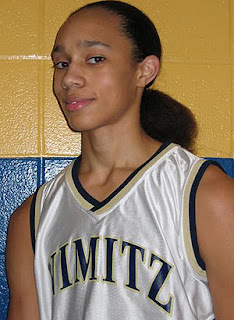 It's a not too well kept secret inside and outside the transgender community how much I love women's basketball, and Stephanie Stevens recently sent me a link to a story about a girls basketball phenom in my hometown.

She's Brittney Griner, a senior at Aldine Nimitz who stands an imposing 6'8" tall. In addition to being considered the number one girls basketball player in the country, sistah girl can dunk.

So what you say? Yes, Lisa Leslie, Candace Parker and Sylvia Fowles have dunked in women's games, and Leslie and Parker have done it in the WNBA. Griner is unique in the fact she doesn't need a clear path to the basket in order to slam.

In other words, Griner can dunk in traffic, with authority just like the boys and has done so repeatedly. She's dunked over 50 times this season and she's still growing. She also has the potential to elevate the women's b-ball game to another rim rattling level. 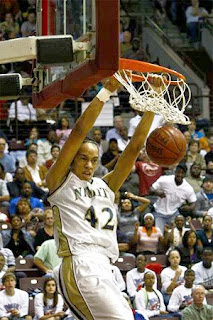 But for you fans at women's basketball powerhouses salivating at the chance to see her playing at your school for the next four years, dream on. You'll have to either catch her on the tube or buy tickets for the game because she'll be playing against your school.

Brittney's staying in the Lone Star State and she'll be terrorizing a Big 12 arena near you after recently signing a letter of intent with the Baylor Lady Bears.

In the meantime, she led the Nimitz Lady Cougars to their first state final and executed the first dunks in the history of the Texas girls tournament as they marched through Region III-5A enroute to Austin and the tournament finals that took place March 6-7.

Unfortunately, after Griner scored 44 points, snared 18 rebounds and blocked 8 shots to help Nimitz beat Pflugerville in the semifinals 74-47 in addition to dunking twice in the game, the 37-1 Lady Cougars were upset in the 5A state title game by Mansfield Summit 56-43, who had their own 6 footer in tournament MVP and TCU signee Starr Crawford.

But fans of women's basketball have much to look forward to next fall and especially in Waco. They are eagerly awaiting the start of the 2009-2010 basketball season and packing Ferrell Center to watch Brittney Griner play.
Posted by Monica Roberts at 1:04 AM

A sports topic I know something about! I feel so special. :0)

No really we had a discussion about this her at my job sometime last week. My job is land of homophobic, transphobic, racist, classist bullshit so I also get where the follow up post is coming from too.

I am in awe of your sports knowledge and Brittney's abilities. The only thing I'm good for on a court is stealing the ball and running it up the court. I can't do a lay up much less a dunk.

jo Jo,
I barely can only with a smaller WNBA ball.

I was just sad that Nimitz lost to an 'ugh' Dallas area school.