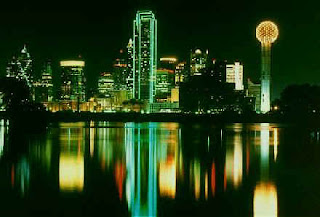 As many of you long time TransGriot readers know, I'm a proud Houstonian who as all Houstonians tend to do will throw a few good-natured barbs at the third largest city in the state.

But when I do it, bear in mind that half of my family on my mom's side is from Dallas and still lives there. In addition to that, my mom and uncle grew up in Little D and when I was weighing my move options in 2001 the city was one of my finalists along with Denver and Atlanta.

Outside of the TV show that was used as a baton by Dallas civic pride defenders along with bragging about a certain NFL football team that played in a domed stadium with a hole in the roof, we Black Houstonian had to live with the fact that Dallas elected an African-American mayor (Ron Kirk) before we did.

Another thing that Dallas has done before the Bayou City and Austin was being the first large city in Texas to pass GLBT civil rights protections. In fact, Dallas has begun to gain a rep as a progressive GLBT friendly city even before it narrowly missed electing the first openly GLBT mayor in the Lone Star State.

Hopefully Houston will beat them to that distinction this fall.
Posted by Monica Roberts at 11:05 PM

Dallas does have a gender and sexual orientation protective ordinance how everrrr, they wrote themselves out of the having to abide by it. Surprised Monica? imagine the look on my face when I discovered that. We have been working on getting the City funded homeless shelter to write up a transgender inclusive policy. I was called by the director after having meet with the city managers in his absence. He told me two weeks ago he had to dot the i's and cross the t's and it would be ready. That was two weeks ago and I haven't been able to get a hold of him since. This process began after I went to the Jenifer Gale memorial right before Christmas.
The city will have a Sheriff and homeless shelter compliant. Next up the big enchilada girl! See you bayou gals at the finish line:)wasn't born in Texas but I got here as quick as I could!

may end up coming to Dallas again this summer for family reasons.

Kelli,
Hope Dallas continues to 'outAustin' Austin and that Monica Barros-Greene decides to make another run for city council.