When I was in Washington DC back in 2000 for the IFGE convention, we got a group of people together to hang out at a local Arlington, VA restaurant. I had a blast meeting and hanging out with Sheriff Tony Barreto-Neto, who was head of the organization TOPS (Transgender Officers Protect and Serve) at the time.

Well, for various reasons TOPS disbanded, but in 2002 a new organization arose to take its place called T-COPS International. (Transgender Community of Police and Sheriffs)

Transpeople and law enforcement is nothing new. I met Lt. Stephan Thorne back in 1999, and there has been a long list of officers and numerous stories about transpeople who have transitioned while members of various police departments in the States and around the world. 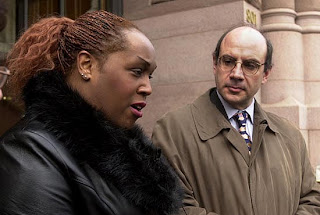 They have had mixed success as well. Some like Lt. Thorne have had long, distinguished and trouble free careers with the San Francisco PD, while others like Sgt. Philecia Barnes in Cincinnati have had to fight tooth and nail and litigate just to stay employed in the jobs they love.

In addition to its Yahoo discussion list and a pending application for 501c3 non profit tax status, T-COPS International acts as a peer support group for its members involved in various areas of law enforcement.

T-COPS International will help the transgender community as a whole if they are successful in terms of getting the word out that 'transgender police officer' isn't an oxymoron. Hopefully T-COPS will evolve to not only continue to be a powerful voice against police misconduct directed at transgender people, but take a leading role in education efforts amongst their fellow officers about transgender issues.

Hopefully that will begin to break down the wall of mistrust building between the transgender community and law enforcement personnel, and help their fellow officers understand that 'protect and serve the public' means all citizens.
Posted by Monica Roberts at 9:13 AM

T-COPS has the potential to do a lot of gret hings for the community, and I hope they are wildly successful at doing so

I'm having a hard time finding anything good to say about law enforcement these days, so I'm glad to hear that there are some folks who may be able to help them turn their image around.