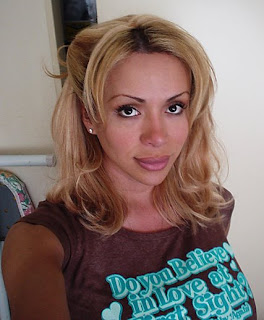 Gia Darling was on MTV's I Want A Famous Face' as well. Found the video for her appearance on the show. It also gives you an idea of just how much can be accomplished body work wise if you have the cash to do so.

It also gives you an idea of some of the pain you'll have to endure as well if you go under the knife to get that type of body.
Posted by Monica Roberts at 12:37 AM

She looks great. But she doesn't look a thing like Pamela Anderson :-)

Nope....
And even Pam replaced he implants a few years ago.

Well in fairness, Pamela Anderson is a redneck from British Colombia and Gia is a latina from LA. No reason why they should look like one another.

@ginasf: Hope you're not thinking that "redneck" and "from British Columbia" always go together. ;-)

They are having the Winter Olympics in Vancouver BTW

They are having the Winter Olympics in Vancouver BTW

I hope you were telling me that. :)

We tried for tickets for figure skating but didn't get picked in the lottery. I've heard there might be rush tickets at event time because they don't want all those VIP blocks to be empty. Looks bad on TV.