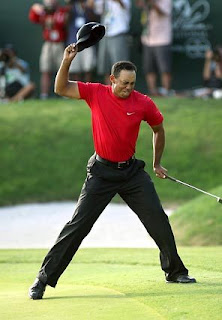 Memo to the Not Ready For Golf Prime Time Players: Playtime is over.

Hope y'all enjoyed your eight month chance to get some of the spotlight while Tiger was rehabbing his surgically repaired knee and welcoming another child into the world.

At the Arnold Palmer Invitational in Orlando he dusted off the patented Tiger Sunday magic. He went from 5 strokes down at the start of the day to draining a 25 foot birdie putt on the 18th hole by shooting a 4 under par 66 round to erase that deficit and set up the dramatic victory.

In the process, he won his 64th PGA tournament, tying him with Ben Hogan for number 3 in all time wins, won his fifth straight tournament event dating back to last year's US Open and served notice that he would be one of the favorites to get another green jacket when the Masters tees off in two weeks.

Hey Augusta, you may want to pre-order that green jacket in Tiger's size
Posted by Monica Roberts at 12:56 PM

You know people are busy complaining that they are going to have to chitlins and rice and peas.

It's like he never was away. Watch out Masters! TIGER'S BACK!