Pirates Of The Indian Ocean 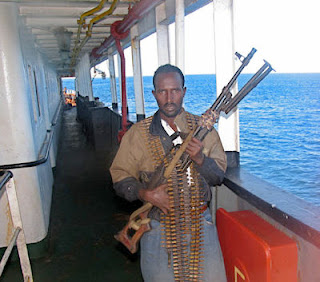 Most of us have seen the Pirates of the Caribbean trilogy of movies in which the adventures of Jack Sparrow were chronicled or heard the stories about 18th and early 19th century pirates such as Blackbeard and others.

NFL football fans know the nickname of the Tampa Bay franchise is the Buccaneers and Texans have heard the stories of pirate Jean Lafitte whose base of operations in 1817 was Galveston Island.

But pirates, far from being a colorful part of world history, are making a comeback. They prowled the waters of Southeast Asia jacking some of the 50,000 ships a year that traverse the shipping lanes passing through the Malacca Strait. Buccaneers are also getting increasingly active in the Gulf of Guinea waters off West Africa as well.

But the ones that have gotten the most attention are the pirates operating from bases on the lawless Somali coast in the wake of Somalia's ongoing civil war that started in 1991.

Somali fisherman using traditional methods began losing their livelihoods to the flood of massive fishing trawlers illegally raiding Somali territorial waters due to the lack of central governmental authority. They turned to piracy as a way to get paid.

Because modern ships don't require large crews to operate them, it's fairly easy for an armed group of pirates to overrun a vessel and hold its crew for ransom. Rather than lose the valuable sailors and cargo, the shipping companies just pay the ransoms, which n recent years have escalated to several millions of dollars. 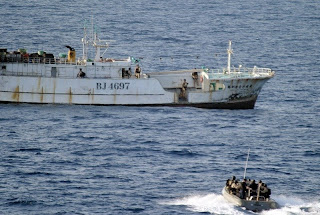 The modern day pirates have three components. The brains of the operation are the ex-fisherman who have the maritime expertise and seafaring skills. The muscle is provided by ex-militiamen who have experience with weaponry as fighters for the various Somali clan warlords over the duration of the 17 year civil war. The technogeeks operate the hi-tech equipment needed to coordinate the piracy operations such as satellite phones, GPS systems and military hardware.

They initially began hijacking ships off the southern Somali coast but in 2007 started moving north to the Gulf of Aden, the Gulf of Oman and the Red Sea. They have now expanded their operations to the Arabian Sea and western Indian Ocean as far south as the Kenyan port of Mombasa.

They got the world's attention in November 1995 when the cruise ship Seabourn Spirit was attacked but escaped by sinking one pirate ship by running over it and deploying a long range acoustic device to drive off the other attackers.

A multinational combined naval task force was formed to combat the rising pirate threat but would either arrive too late to stop an attack, would have to watch helplessly as pirate ships attacked vessels in Somali territorial waters or while in pursuit of them had to back off after the pirates slipped inside the 12 nautical mile territorial limit they had no authorization to enter. 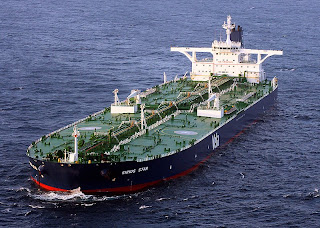 In the meantime the pirates are getting even more brazen. On November 15, 2008 they seized the supertanker MV Sirius Star 450 nautical miles southeast of Mombasa. It was headed to the United States via the Cape of Good Hope and was carrying 25 crew members and a full load of oil worth $100 million. It was not only the largest ship the Somali based pirates had captured to date, it marked the farthest point south that they had hijacked a ship.

The capture of that Saudi owned ship caused a major spike in the world crude oil markets and was released after paying a $15 million ransom.

They have also attacked additional cruise ships and fired at warships as well. On March 10, 2006 the USS Cape St. George and USS Gonzalez after having its boarding parties repulsed by small arms fire and being attacked by pirates firing RPG's at it, returned fired with naval guns. The first US naval gun battle of the 21st century resulted in the pirate vessel being set ablaze. On November 19, 2008 the INS Tabar sunk a pirate-captured Thai vessel after pirates fired on the Indian naval ship which was there on a mission to protect Indian and other foreign vessels transiting the Gulf of Aden. 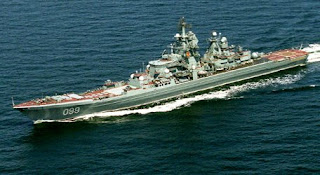 It's an example of the increasing successes of the Combined Task Force in stopping many pirate attacks, and more seafaring nations such as Japan are sending warships to join the CTF effort.

But the CTF can't be everywhere. Even with the Somali authorities giving authorization to increasing numbers of nations to enter their territorial waters to eradicate piracy, the CTF has the daunting task of patrolling a million square miles of ocean.

It also has the problem of plenty of willing volunteers in Puntland joining the pirate ranks in a country with few attractive economic options, alleged government complicity and whole towns experiencing economic booms because of pirates lavishly spending their booty on supplies and goods.

It's going to take a while before the nations alarmed and fed up with the latest piracy scourge finally get the upper hand on the Somali pirates brazenly attacking their ships off the Horn of Africa.
Posted by Monica Roberts at 12:31 PM