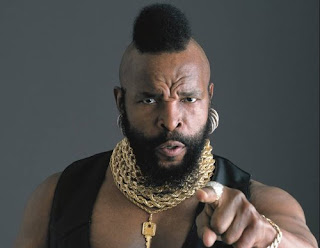 Ahh, today is the first day of spring. The weather is warming up, we have NCAA men's and women's tournament games all over the tube, people got their drink on for St. Patrick's Day and we have our first signs that the stock market is starting to respond to the economic stimulus package.

But as Mr. T admonished us, fools are everywhere. And let's see what fools we get to not pity this week with our illustrious award. 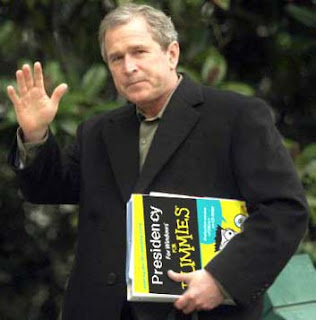 It was a target rich environment for fools this week. I could have chosen the GOP, Glenn Beck, Laura Ingraham, or Jimi Izrael just for starters, but once again it's no contest.

It's our former resident in thief George W. Bush.

He ventured north of the border to Calgary for a 'speech' that 1,500 fools paid C$400 a plate to hear that was closed to the press and 100 Calgarians protested. Gee I wonder why?

And when talking about the book he's going to have ghostwritten (and no it isn't My Pet Goat, the sequel) about the 12 toughest decisions of his mispresidency, he stated. 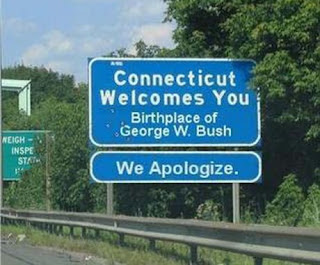 “I’m going to put people in my place, so when the history of this administration is written at least there’s an authoritarian voice saying exactly what happened,”

Aren't you glad we now have a president that not only was overwhelmingly ELECTED, but is intelligent and has excellent command of the English language?

Wrong choice, Monica. The fool isn't Bush. The fools are the stupid people who paid out Canadian dollars to listen to him butcher the English language.

I do wish he would shut up! I don't ever want to hear his stupid snickering giggle again. I just want him to shut up and go away and take his mother with him.

Actually, there were between 400 and 500 people there protesting (at its peak -- it was quite cold with the wind, so people started cutting out early, and there was maybe 200 who were there for the full stretch), going from both my estimates and those of organizers who have done these kinds of things before. The newspapers' websites were even reporting 400 the night of that event, but that number has been shrinking ever since. We certainly weren't outnumbered 10 to 1 or more by people lined up to hear Bush speak!

My favorite sign: "Calgary Chamber of Commerce is taking advice from THIS guy...?!?"

It's a honor just to be nominated.

Thanks for thinking of me.

....at least there’s an authoritarian voice saying exactly what happened.

Dunno, Ms. Monica. I think he had a perfect command 'cause, really, it was a Freudian slip. He was trying to be authoritarian his entire presidential tenure, the Bush Doctrine being an example of that. What he and his cronies (Cheney, Rove, etc.) tried to be was disingenuous about it. (All that "winning hearts and minds" BS.) To make sure that his wildly delusional ideas about his wack presidency are told to his satisfaction...yeah, he's going to want someone pretty authoritarian to do so.:D

Honestly, I'm happy the man *finally* came clean about it. It's good to know a person's agenda.:D

Jimi, go somewhere and finish being bitter toward your ex-wife.

Your comments in your Rihanna post were foul anyway and only George W. saved you from being the fool this week.

But I'm sure your woman hatin' behind will eventually garner a SUF Award.