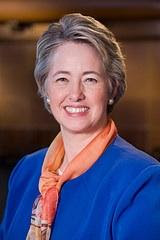 The Annise I'm talking about is Annise Parker, who announced last month that she's beginning a history making run for mayor of my beloved hometown. If she wins she'd be the second woman and first open lesbian mayor of H-town, but even more significantly, in the Lone Star State as well.

Didn't think that my hometown was that progressive, huh? Don't believe everythang the GOP tells you about Texas being a so called 'red' state. They bamboozle enough yahoos to vote for them in the rural areas, but Texas cities are progressive turf. In fact my hometown and Harris County voted for Obama in the election.

But back to the post. I've also had the pleasure of seeing her run for and get elected three times to city council in an at large seat and currently serve as Houston's city controller.

For you transpeeps and our allies, yes, she was president of the Houston Gay and Lesbian Political Caucus and not only supports us, she's cognizant of our issues. The Houston transgender community worked our asses off to get her elected during her first run for council. 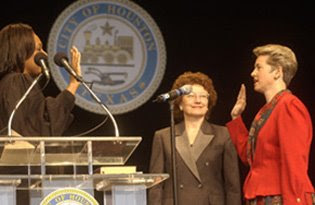 And as someone who cut her teeth in Houston's activist community, it's nice to see someone I've met at our Unity Banquet in 2001 when she was on city council and admired for some time finally go for her dream of running our hometown. I may be a little biased, but I truly believe she'll be the best person for the job. I'm a little bummed that I'm 1000 miles away from being able to contribute some time to help work on her campaign, but I can donate some money to do so and will when my budget allows it.

It's a long wait until November 3, but hopefully on that day Houstonians will making another historic choice amongst the many I've seen in my lifetime and make her our mayor.
Posted by Monica Roberts at 5:48 PM

This is good news. Let's hope she wins!

TB Texan,
So far she's the frontrunner for it. The other announced candidates have zero name recognition.

yeah thats true...i was reading this yesterday. zero name recognition and can't match her campaign funds either. i'll have to admit though,when i was reading this the other day - i had no idea who i would root for. i really do love mayor bill white - i think he has done a lot to 'keep houston moving'

i will say that i am taking your endorsement very seriously....thanks!

We didn't do too badly in Houston under Kathy Whitmire.

Annise has the smarts, talent, vision and fiscal management skills to help our hometown grow so I can come back home. ;)

So happy about this. I'm glad she actually has a chance.