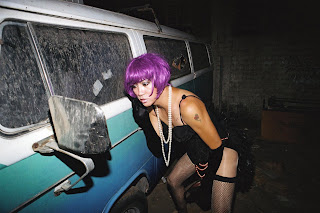 Paper Dolls is the 2005 award winning documentary film by Tomer Heymann about a group of transpinays in Israel.

After closing the border to Palestinian workers during the intifada, Israeli authorities sought to fill gaps in the job market by enticing workers from other parts of the world. Among those who answered the call were transpinays in various stages of their gender transitions who emigrated and worked as home health care workers.

On their one day off they perform at a Tel Aviv night club as a drag troupe called the Paper Dolls.

The award winning film captures their stories in terms of being away from home, being strangers in a strange land and persevering despite their ineligibility for citizenship and living precariously under the threat of visa revocation is they lose their jobs.
Posted by Monica Roberts at 1:23 AM

My partner and I saw that documentary some months ago (on DVD). We liked it a lot. I recall a particularly touching relationship between one of the women who worked as a caregiver for an elderly man. She was almost like a daughter to him.

Looks interesting Lady V. I'll have to check it out.

The really heartbreaking thing, Veronique, is that the woman you mention--Sally Camatoy--who returned to the Philippines at the end of the film? She was murdered shortly afterward, and her name was added to the Day of Remembrance list.

It's a good documentary, Monica, though hard to watch in some places--especially for me as a Pinay. There's a place where an exploitative venue makes the troupe dress as geisha because hey, Asians are all the same, despite the really horrific history of Japanese occupation in the Philippines, and it got me out of my seat I was so upset at the way they were treated.

Another thing to look out for as far as I remember it--just as a warning--is that the filmmaker is a cissexual queer man who consistently treats the trans women in the film as a sort of exotic foreign species of queer man rather than as women, and while he's kind, he's quite clueless.

little light,
Thanks for the heads up on that.

I had a Pinay coworker who was old enough to remember the Japanese occupation and told me some stories.

Yeah, my grandfather and great-grandfather were guerrillas in the resistance and the insurgency afterward, and my grandmother spent large sections of her childhood in a hidden basement hearing people screaming outside. I had family in the Bataan Death March. It's...not a pretty history at all.
On the bright side, my great-great aunt, who was trans, met an American soldier and left to travel the world, so that was all right, I guess.

Little Light,
My coworker Ron told me about a time they were hiding a relative who was in the resistance and his family from the Japanese soldiers that were looking for them.

Ron told me that the relative covered his mouth and quietly shushed him to get him to calm down long enough until the Japanese soldiers gave up and left.