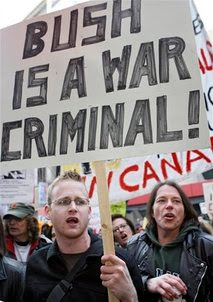 When President Obama made his first trip abroad to Canada last month, he was warmly greeted by the people of Ottawa and government leaders from Governor General Michaelle Jean to Prime Minister Stephen Harper.

No such luck for Bushie boy as a shoe throwing crowd emulating Iraqi reporter Muntazer al-Zaidi (sentenced last week to three years in prison for hurling his shoes at Bush in December) of 100 people welcomed him to Calgary and his first speech since slithering out of office in January. Calgary is the center of Canada's oil industry and is known as one of the country's most conservative cities, so Bush felt comfortable enough to leave Dallas.

While 1,500 business people waited outside the convention center for an hour to pass through tight security and enter the C$400 a plate ($315) luncheon to hear Bush speak, the crowd outside chanted 'war criminal'.

By the turnout among its business community for the speech, it is clear that Bush can still draw a crowd, city councilor Joe Ceci said.

"But it's this crowd that gratifies me even more," Ceci said of the demonstrators. "Just to see Calgarians interested, aware, and just kind of speaking up, and speaking up for things anti-war."
Posted by Monica Roberts at 5:45 PM

How many speeches was Herbert Hoover paid to make during the 1930s, I wonder? Except Hoover didn't start a needless foreign war.

And this is one more reason why CANADIANS ROCK!!!!

Dennis
Yes, they do.

Polar
Hoover had speaking abilities worth getting paid for. C$400 a plate to hear that inarticulate dufus?

You'd have to pay me to agree to listen to Bush speak. I'd charge thousands, plus open bar, prime rib, and free hotel suite.

May I suggest throwing a size 5 heel?