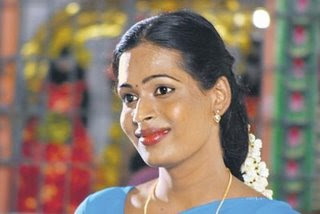 I found it interesting last year that a young Indian transwoman has gone somewhere that transpeople in the States haven't. But what else is new for us here?

Last year Karpaga made history in India as she became the first transwoman to be cast in a lead role in a commercial film. She was cast as the lead in a Tamil language film called Paal, which means gender in the Tamil language.

While Indian transpeople are justifiably proud of this cultural step up since they have been dissed for far too long in movies like their American cousins, at least they actually have transwomen playing transwomen in their films.

And based on the plot synopsis for this one, Paal looks pretty interesting. She's playing an intellectual filmmaker who falls in love and faces the 'do I tell' dilemma.

What we've gotten here in the States, be it the silver screen or television is cisgender actresses scooping up those role. The recent announcement that Nicole Kidman is set to play pioneer transwoman Lili Elbe in the indie film The Danish Girl only heightens our annoyance about this. 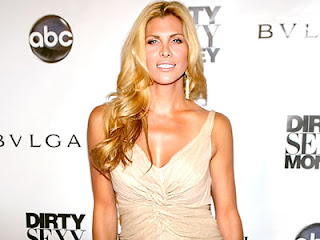 It's not like we don't have transgender actresses in Hollywood. Candis Cayne, Calpernia Addams, Aleshia Brevard, Jazzmun and Alexandra Billings are some of the ones that come to mind. Candis recently had her groundbreaking role in the now cancelled Dirty Sexy Money that ended predictably in her death, but that's another post.

It would be nice if Hollywood would actually put a transwoman in a transgender role, but they still can't get it right with cisgender women of color either.

As for Paal, here's hoping it's an artistic and commercial success in India and beyond, and it leads to a nice career for Karpaga and other Indian transwomen who follow in her pumps.
Posted by Monica Roberts at 12:11 AM

By my reckoning, there have been trans-themed films in Korea, Thailand, Japan, France, Denmark, Brazil, Italy, and now India that have actually used trans performers either playing trans people or even non-trans people. With the exception of the little get-together group in Transamerica, the US has seen fit to not be on that list. I saw the second showing of Transamerica (which I give about a C+) at the Frameline Festival in SF, and Duncan Tucker took questions afterwards. Of course, the question of 'why didn't he use a trans performer in the role' came up. He sputtered and said it hadn't really crossed his mind when he was making the film. Nuff said.

I remember the storyline on Dirty Sexy Money, the few times I watched it, and I thought it was cool they were giving trans exposure and coverage in a sympathetic light.

I also thought the same about Rebecca Romijn's character on Ugly Betty.

Dennis,
The Alexis character got crazy in the second season of Ugly betty by the time she quit the show.

It's like the writers had no clue what to do with her.

Still waiting for a transcharacter of color like that though that ain't a hooker.

Both Dirty Sexy Money and Ugly Betty totally messed up their trans characters. On DSM she was a glorified hooker (although they never exactly said that) and they didn't know how to use Candis Cayne's natural charm and humor. She basically had a handful of scenes in the first season where she really got to surpass their lame writing (let's face it, the entire show was a mess, despite the talented cast). By the second season, they got rid of her, as though their viewing audience would be embarrassed by her (when, in fact, she was a fan fav). Alexis on Ugly Betty was all over the map as a mysterious villainess, a trampy publicity hog, victim, insecure nice girl... and ultimately murderess. Poor Rebecca Romijn got so disgusted with the bad writing for her role she wanted off the series (plus she was pregnant with twins). Considering all the publicity in 2007 around transpeople on tv, by 2008, they were both gone. Typical. Then look at other series with trans reoccurring characters like "The Education of Max Bickford" which had a wonderful, non-stereotypical transwoman character which was pretty much cut after 8 episodes and L Word, which has an absurd, also marginalized depiction of an FTM which fizzled into nothingness. It's clear writers have no idea what to do with these characters as HUMAN BEINGS other than as gimmicks. I didn't see Laverne on the P.Diddy show, but I know on ANTM, Isis was pretty much programmed to fail (they had two swimsuit challenges in a row... something I've never seen on that show before). She showed a lot of class, and poise but was ultimately used as bee-och bait. I'm not even going to mention all the trans corpses that turn up on those stupid CSI shows. Yeesh!

Gina,
You think we have it bad concerning transgender TV portrayals, try walking in my pumps and seeing almost every transgender woman who shares your ethnicity being portrayed as a sex worker.