I've always loved to travel, and one of the best times in my life was working for an airline that allowed me the opportunity to indulge in one of my favorite pursuits. One of the countries that's very high on my travel to do list is our northern neighbor.

I've been fascinated with Canada ever since I was a kid. While my Black Canadian cousins may be on the other side of the border, they have made contributions not only to their own nation's culture, but mine here in the States as well.

As I became more aware of the history of African descended peoples across the Diaspora and cognizant of the deep connections that Afro-Canadians and Afro-Americans share with their African cousins around the world, and the similarities in our lives despite living on opposite sides of a long border, it has only increased my desire to visit the country. 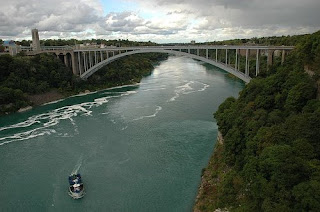 I definitely want to visit Nova Scotia, see the stops on the Black History Trail in southern Ontario, check out Toronto and Montreal, and bounce up to the Falls and visit a certain Canadian based blogger and hand her in person the cornbread recipe she's been hounding me about.

Being in Louisville I live near the Ohio River, and every time I cross it on one of the three bridges in the area, the Kennedy, the Clark or the Sherman Minton I remember the symbolism of it. Crossing it represented freedom to those traveling on the Underground Railroad.

But I think that my wanting to visit Canada is a little deeper than that. It's as I make that journey northward along concrete ribbons of interstate highway I ponder my ancestors who were trying to get to Canada while being chased by slave catchers seeking to return them to the life of involuntary servitude they wished to permanently leave behind. It's also the desire of wanting to symbolically tap into my north of the border history as well.
Posted by Monica Roberts at 11:01 PM

When I was in the Navy my submarine stopped in Nova Scotia for a week the people there were the most friendly people I have met. There were plenty of clubs to go to

If you have a mind to see Vancouver at any point, let me know. I'll be your personal tour guide.

We don't have quite the history of back east though.

This Niagara Falls based blogger will be happy to welcome you as long as you hand over the good first. LOL