Transphobic Conversation In The Nail Salon-What Would You Do?

'If you're worried about people calling you 'angry' for speaking your mind, you'll be angry at yourself later for not doing so' -TransGriot October 9, 2013

This is a situation worthy of the ABC-TV show hosted by John Quinones entitled What Would You Do?  except there wasn't a hidden camera around to catch for posterity the transphobic bigotry being uttered.

The inspiration for this post came from a member of one of the Facebook trans person of color groups I'm a member of.  It speaks to the everyday macroaggressive and microaggressive crap that we transpeople have to deal with sometimes when we're out and about navigating the world.  Sometimes we get hit with it when we least expect it.

This trans feminine Facebook friend relayed the story to the group about being in her friendly neighborhood nail shop yesterday to get her nails done.  She found herself sitting next to two cis women who were shadily discussing a trans woman that was allegedly a friend of one of the cis women.

The conversation started off with the cis woman repeatedly misgendering her trans feminine 'friend' and transphobically discussing her business.  She went on to tell the other cis woman about the trans woman's boyfriend paying for her SRS while making disparaging and ignorant cis privilege filled remarks that angered the trans woman getting her nails done, even though she wasn't acquainted with the trans women they were gossiping about..


Here's what she had to say about the nail shop incident in our FB group.

All along they had no clue that I was a trans woman in the next chair overhearing this conversation.  I can't begin to tell you how upsetting it is to hear the degree of ignorance that utters out of the mouths of some people, and it's one of the reasons why (no shade) I do not hang out with many genetic women.

Because no matter how feminine or whatever SRS or other surgeries we do to complete the physical transformation to match the mind, many of these genetic women still don't get with the program and continue to have the audacity to describe a transwoman whether they are friends or not as a he.  I am just over it!!!!!
I asked her the question in the group if this conversation was so upsetting to you, why didn't you call the cis women out about not only their transphobic behavior, but the other cis woman for betraying the trust and friendship of the trans woman who has no idea that her cis woman 'friend' stabbed her in the back?


So what would you have done if confronted with that microaggressive nail shop situation?

I can tell you what the TransGriot would have done.  I would have not only called out the cis woman for hatin' on, betraying and stabbing her trans friend in the back, I would have called her out on her transphobic bigotry.  And yes, if you're concerned about maintaining your stealth status, there are easy ways for you to call the person out without revealing you're trans. 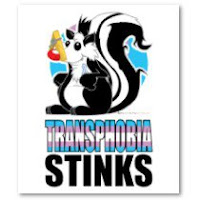 I would have done so (and have in a similar situation in my past) because that Trans 101 conversation was now necessary in order to debunk the bull feces and ignorant transphobic bigotry coming out of these cis women's mouths that cannot be (and shouldn't have been) left unchecked.

It was an opportunity to not only 'ejumacate' these fools about our lives but everyone in that nail shop within earshot of that jacked up conversation.

After I was done thoroughly debunking their anti-trans bullshyt, they would have thought twice before they ever flapped their gums to ever negatively bash a trans woman in public again.

And yeah, I would have done so because in the interests of preserving my own mental and physical health in the face of this unexpected and unprovoked microaggressive assault, I've got to call your transphobic azz out.

Because to paraphrase what I said at the beginning of this post, I'd rather you call me 'angry' for speaking my mind instead of being angry at myself later for not speaking out.


TransGriot Update:  Got an answer to my question after I completed the post.   She was so pissed off about what she'd just witnessed all she wanted to do was just get her nails done and get out of the shop.   Understandable.  Sometimes you have to pick your battles.  I just felt as though this was one that was worth fighting..
Posted by Monica Roberts at 2:00 AM