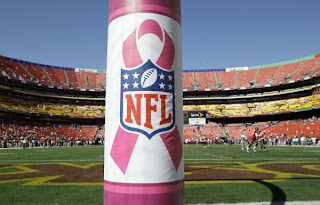 The slump continues as I had a below .500 week prognosticating games to go with my pissivity over the pathetic Texan offensive performance in San Francisco.

Incredibly, Matt Schaub is probably going to start this weekend against the St Louis Rams.  If he throws another pick six at Reliant during that game they will hear the booing all the way on the other end of I-45 and Gary Kubiak may need to start considering updating his resume.

I stunk up Week 5 with an unacceptable 6-8 record and gotta get out of this funk because we're almost at the halfway point of the season.  Fortunately I had company as Eli seems to have cooled of from his hot start but Mike is starting to get hot now and chopped Eli's lead down to three games over him.

Anyway, before I get to this week's picks, October is the NFL's 'A Crucial Catch' breast cancer awareness campaign in which the NFL logo appears with the pink breast cancer ribbon, players wear gear with pink trim and the referees throw pink penalty flags at many of the games this month.