One of the depressingly consistent stories I've chronicled since I started this blog in 2006 is the long and sometimes ugly history of police misconduct aimed at transwomen that is sadly widespread across the nation in red and blue states.

The root cause of the May 1959 Cooper's Donuts Riots in Los Angeles, the August 1966 Compton's Cafeteria one in San Francisco and the June 1969 Stonewall Riots is trans and gender variant people getting fed up with police harassment of them.

We have had far too many cases of trans women disrespected in their own homes, having their human rights violated, messed with in jails by guards and prisoners alike, physically and sexually assaulted , subjected to stop and frisk tactics and even shot at by a drunk off duty cop pissed off because a trans woman rejected his disrespectful sexual advances.   And in far too many of those cases the police disrespect of trans women and disregard for their human rights has been aimed at Black and Latina transwomen.

Now comes word from the Left Coast concerning a transwoman who filed a federal lawsuit on October 18 under a pseudonym that seeks unspecified monetary damages and names as defendants the city of El Monte, CA and an unnamed police officer she alleges sexually assaulted her. 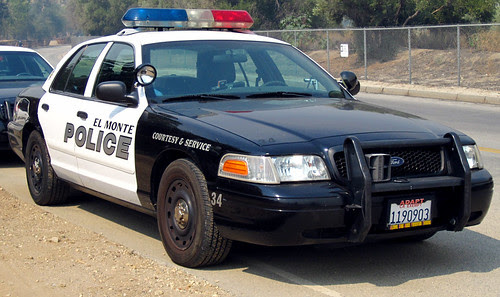 According the the complaint, plaintiff  'Jane Roe' alleges that in the early morning hours on October 23, 2012.she was crossing Garvey Avenue at Central Avenue (map) on the way to a friend's house between 4 AM and 6 AM PDT when a uniformed El Monte police officer pulled up in a marked patrol car and demanded to know what she was doing, according to the civil complaint.

The officer ordered her to lean into the driver's side window of the patrol car and "Because she feared for her safety if she refused, (she) leaned forward and (the officer) groped her breasts," the complaint says. "He then asked (her) if she was 'a nasty she-male.' (She) responded that she was transsexual."
The officer then allegedly ordered Roe to walk into an alley behind businesses in the southeastern corner of the intersection, and into a secluded parking lot behind 10052 Garvey Avenue in which upon arrival he ordered her to perform oral sex on him, the complaint says.

After several minutes, the officer raped her on the trunk of his patrol car while calling her demeaning names.
The officer then allegedly threw his used condom on the ground and told the trans woman to leave. After a few moments, she returned to retrieve the condom for use as evidence, according to the complaint.

Jane Roe's federal lawsuit is a reminder of how many times the police officers who are sworn to protect and serve us have forgotten or ignored the fact that we transpeople are part of the community and we have human rights that you violate at your peril.

I hope they fry his behind