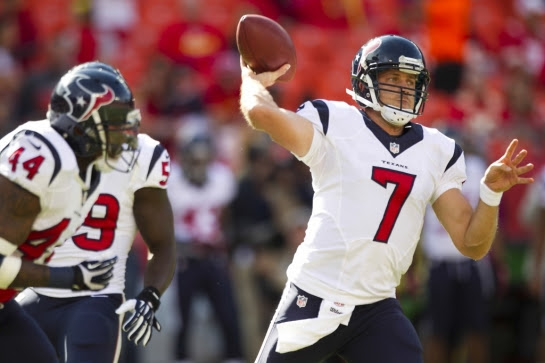 It is the halfway point of the 2013 NFL season and the prognostication contest I'm in with Mr. Blake and Mr. Watts.  As you probably guessed, I'm not happy with where I am at this stage of the season

Mike finally caught Eli, and the next eight weeks of the season are going to be interesting in this prognostication contest between these two.  Can I get back into the thick of this contest and erase a nine game deficit to both of them with 8 weeks to go in the 2013 NFL season?

Maybe, since my tendency has been to get stronger as the season progresses.  But in order to make that comeback happen, I need a string of double digit wins starting now.

I'm also not happy with where my hometown NFL team is, and neither is Texans owner Bob McNair, the fanbase or the players. At least I can say with absolute certainty the 2-5 Texans won't lose this Sunday because they're on their bye week

The good news is the Texans finally did what me and half of Houston wanted them to do and start Case Keenum.  He performed admirably in their 17-16 loss to the unbeaten Chiefs.   The bad news is we lost Brian Cushing for the season.

Last week I achieved a dubious distinction.  I've never had happen to me in all the years I'm prognosticated  NFL games and done so on this blog had two sub.500 weeks.  First time for everything.

While I'm pissed off about the subpar Week 7 record, Mike and Eli were only marginally better.

So let's get to work. In addition to the Texans there are five other teams on their bye week so only 13 games to select.  Teams I'm picking this week are in underlined bold print.   Eli and Mike's picks are here.