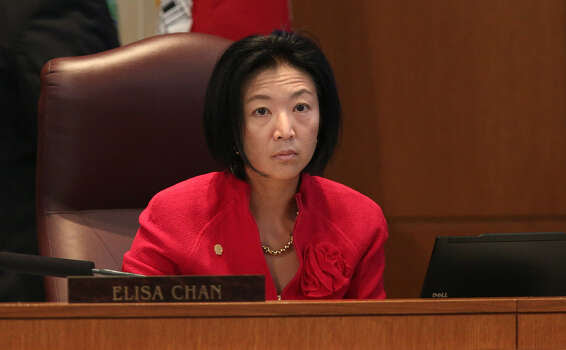 There's good news and bad news for our TBLG peeps on the western end of I-10.

The good news is that transphobic and homophobic councilmember Elisa Chan has resigned from the San Antonio City Council effective October 18.

“I have done my best to represent the conservative values of these fine people. The people of this district take an active role in deciding policy, giving their input, volunteering their time and listening to the views of their neighbors,” she wrote in her resignation letter to Mayor Julian Castro. .

She was one of the three NO votes against the San Antonio non discrimination ordinance that added gender identity and sexual orientation language on September 5 and incredibly voted against the veterans protections that passed on a 9-2 vote the same day.

So now that I've given you the good news, hope you're sitting down for the bad news trans and SGL Texans.

The bad news is that Chan resigned in order to run for the Texas state senate   She announced she was challenging incumbent Teapublican freshman State Senator Donna Campbell for the District 25 seat   Texas law requires that she resign from her council seat in order to run for the state legislature with the filing period starting on November 9 and running through December.

Please tell me San Antonio BTLG family y'all have a strong Democratic candidate running for the District 25 senate seat in case Chan knocks off Campbell and gets through that GOP primary.

The last thing I want to see in the 2015 Texas Senate is Elisa Chan sitting in it.