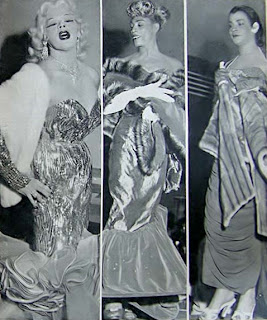 This is the last Friday of October and next Thursday the Trans* National Holiday, AKA Halloween will arrive.

Mixed in with all the little ghouls, goblins and kids dressed up as their fave characters in search of candy will be the big kids doing the same at various Halloween parties and balls.

And I wonder how many will be dressed as Olivia Pope since we all know what TV show appears on Thursday nights?

I call Halloween the Trans National Holiday because once upon a time trans boys and girls and cis allies, on Halloween night in Chicago the huge Finnie's Ball used to take place on the South Side.  In New York similar elaborate drag balls were talking place in Harlem with the winners getting cash prizes for looking as femme or a masculine as possible.

Those balls became such an eagerly anticipated event they drew crowds in the thousands and garnered press coverage in EBONY, JET and the Chicago Defender.

And speaking of eagerly anticipated, that's a nice segue into moving on to conduct our usual Friday 'bidness' in our TransGriot Shut Up Fool Awards in which I shine a bright spot light on the fool, fools or group of fools that exhibit mind numbing stupidity, overbearing arrogance, or just deserved to be called out for whatever reason.

Let's move on to our American Horror Stories of this week.

Honorable Mention number one goes to Rep Blake Farenthold (Teabagger-TX) , who said this in the wake of questions asking why he voted to shut down the government in his Corpus Christi area district that has lots of military vets in it who were facing the possibility of not getting their disability checks.


“I feel like my mandate when I was elected was to go reduce the size of government, lower taxes, and increase freedom, and freedom isn’t free, and sometimes you have to make a small sacrifice to move forward with what you’re after.”

November 4, 2014 can't get here fast enough for me.  Please find someone to run against this conservaidiot.

Honorable Mention number two goes to Sen. John Cornyn (R-TX) whose made this bigoted tweet about the ACA that was captured by Mr. Watts.

Senator, you do realize you have to run for re-election next November and there are a bunch of fair minded Texans ready to take our frustration with Teabagger Ted out on you.in 2014?

Honorable Mention number three goes to Pastor Pharisee Kevin Swanson, who on his radio show started the War On The Girl Scouts up again and implored his sheeple to not buy Girl Scout cookies because it was a wicked organization that doesn't promote 'godly womanhood'.

He also deployed the c-word in his comments.   Communism

Oooo-kay.   Time to triple my GSUSA cookie order this year and I suggest you readers do the same.

Honorable mention number four goes to (hopefully former) Richland County, SC deputy Paul Allen Derrick, whose drunken response to 23 year old USMC member Brittany Ball out of Fort Jackson when she resisted his unwanted sexual advances outside a Buffalo Wild Wings in Columbia, SC.  His pissed off response was to go get his gun and handcuffs and attempt to forcibly arrest her

Fortunately for Brittany the incident was caught on tape and Derrick has been suspended and is hopefully on his way to being fired.

Honorable Mention number five is a group award for the right wing Pacific (In) Justice Institute for not only lying on a California high school trans teenager and accusing her of 'harassment' for simply going to the lavatory that fits her gender presentation, they have triggered bullying of her so intense the parents of the trans child were compelled to place her on suicide watch.

I warned y'all these shady idiots were coming after us, and we better be ready trans community and allies to hit back just as hard.

Our winner this week is the dishonorable senator from Alberta, Rafael Edward Cruz (Teabagger-TX)

In addition to parting his lips to suggest that the GOP attempt another shutdown,  Teabagger Ted joked at a recent Houston Tea Klux Klan event that the new Affordable Care Act exchange website was being run by Nigerian email scammers.   The Nigerian government in the wake of that comment demanded an apology.

It also came out that the man who wants to keep the rest of us from getting affordable insurance coverage is on his wife Heidi's high dollar plan provided by the investment firm Goldman Sachs where she works.

Can you say GOP hypocrite boys and girls?   Thought you could.


Now it's time to say something else about this situation.   Mr T, take it away.