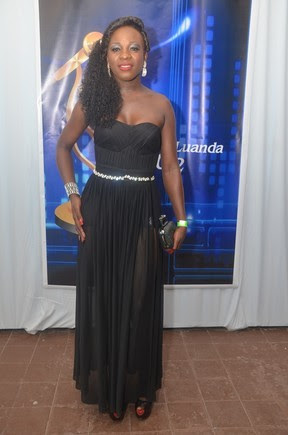 I've talked about award winning girl like us Titica, who is a rising music star in her native Angola.   She has performed for Angolan President Jose Eduardo dos Santos and garnered quite a following in the world of kuduro, the indigenous music that mixes techno and rap.

Her 2012 Kora nomination in the best female artist in southern Africa category is a testament to her fame spreading beyond the borders of her heavily Catholic nation and its reach into other parts of southern Africa.

It's why UNAIDS recently tapped her to become its official Goodwill Ambassador for Angola.

Because Angola was embroiled in conflict form 1975 until 2002 with a few interludes, its borders were relatively closed to its Southern African neighbors.  One of the interesting side effects of that war induced isolation is one of lowest prevalence rates of HIV-AIDS infections on the African continent at 2.1-3.4% in contrast to its neighbors Namibia, Zambia and the Democratic Republic of the Congo, that have some of the highest rates.

But because Angola has increasingly opened its borders to those neighboring countries, that prevalence rate is starting to rise along with the new AIDS infection rates and deaths from the disease.  Angola is one of the few African nations in which HIV-AIDS infections and deaths have risen in the last ten years, which is why UNAIDS has been working with popular Angolan cultural figures to get their message out and change that.

UNAIDS is also concerned the Angolan government head in the sand denial they have SGL people in their country having sexual relations with each other and their numbers are rising is only exacerbating the problem.

They are also trying to reach Angolan youth with their prevention message along with the trans and SGL community in Angola, and Titica is well positioned and eager to do her part to reach those groups.

She said when speaking about her new appointment as the UNAIDS goodwill ambassador, "I myself have suffered much humiliation. I have been beaten and picked on for who I am.  But I am ready to lead by example to fight against stigma and discrimination in my country and beyond."

UNAIDS hopes that Titica is the person they need in Angola to break down barriers, erase stigma and help them slow down and reduce the numbers of HIV-AIDS cases there.