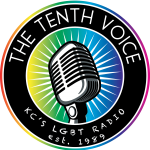 Since I used to co-host a radio show on KPFT-FM, our local community radio station in Houston, I love having the opportunity to do radio interviews with folks who work or produce informational talk shows at public radio stations.

Later this afternoon at 1 PM CDT I'm being interviewed by Sandra Meade of KKFI-FM 90.1 in Kansas City, MO during the first segment of her Trans Talk edition of the Tenth Voice show.

Yeah, I would have to go do an interview on a Kansas City based show days after my fave NFL squad lost at Arrowhead Stadium.

The Tenth Voice is a KKFI-FM show created in 1989 by and dedicated to the Greater Kansas City area's LGBTQIA people.  Listeners can tune in each Saturday at 1:00 PM CDT and around the world online.

Since its 1989 beginnings, The Tenth Voice radio show's mission has been to document history and inform the LGBTQIA Kansas City community.

The name of the show comes from the early Dr. Kinsey sex studies where he determined that 1 in 10 people are homosexual. That number has changed over time but just like the historic Stonewall name, they have kept the show name for the same reasons.

So for my TransGriot readers in the Kansas City area, tune in to KKFI-FM at 1:00 PM CDT to hear my thoughts about that and all the topics we can cover during my segment of the show.

As soon as Sandra lets me know the show has been archived, I'll post links to it.