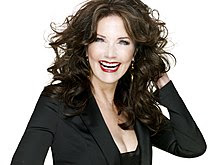 I have loved Lynda Carter ever since I saw her playing Wonder Woman back in 1975.  The fact she is a Latina was a bonus.

She's a huge ally for the TBLG community and liberal- progressive causes, and isn't shy about speaking her mind like she did back in October 2008, when the wingers were trying to portray Caribou Barbie as her famous alter ego and she quickly put that to rest.

She was recently interviewed on Thomas Roberts' MSNBC show, and what she said about the political discourse in Washington DC and Fox Noise viewers will probably have them attacking her in 5...4...3...2...1...

Anyway, for your enjoyment, the October 24 MSNBC interview with Thomas Roberts


Visit NBCNews.com for breaking news, world news, and news about the economy
Posted by Monica Roberts at 12:00 PM