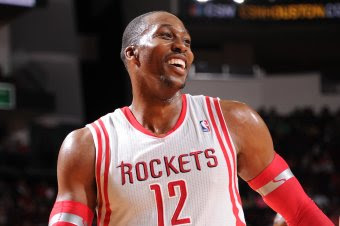 Since the Texans are having a less than stellar season and the Dynamo don't start their MLS playoff run until tomorrow night,  the eyes of Houston's sports fans are turning toward Toyota Center and what we are anticipating to be a very successful and entertaining season in the wake of the signing of Dwight Howard from the LA Fakers Lakers.

So are the networks who cover the NBA, because the Rockets are scheduled for 20 national telecasts this year.

This highly anticipated season for my fave NBA ballers gets launched later tonight against the Charlotte Bobcats.  We're not expecting to make it to the NBA Finals a few months form now but if they get 55 wins, a top 4 seed in the Western Conference and out of the first round of the NBA Western Conference playoffs we'll consider it a success.   It they exceed that, even better.

And yeah Laker fans, we're looking forward to November 7, when your NBA franchise has to bring their butts to Toyota Center.

TransGriot Update:  Dwight Howard sure did look good scoring 17 points and yanking down 26 rebounds as the Rockets won their season opener 96-83 over the Charlotte Bobcats
Posted by Monica Roberts at 12:00 PM