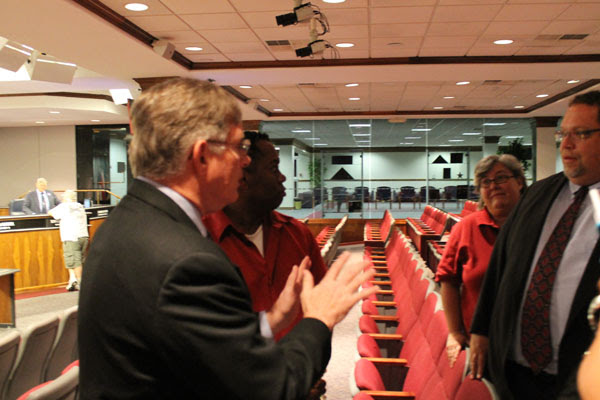 Garland DART board member Michael Cheney taking that futile walk that denied a quorum for passage of domestic partner benefits during the September 24 DART board meeting may have been the spark that finally motivated the TBLG peeps in Garland to push for their own non-discrimination ordinance.

Garland BTLG community residents accompanied by Rafael McDonnell and Dallas Gay and Lesbian Alliance President Patti Fink showed up at a recent meeting of their city council accroding to the Dallas Voice and expressed themselves not only about Cheney's walkout at the DADT meeting but the lack of a non-discrimination ordinance in Garland.

Lerone Landis told the council at the October 2 meeting he is a daily DART rider who lives in the city with his husband and their 4 year old daughter. He stated he was disappointed to learn that it was Garland’s representative who prevented the healthcare equalization plan from passing and urged the Garland City Council to pass a nondiscrimination policy for its own employees and city residents to show they are serious and committed to diversity in the city.

Carmarion Anderson said she was embarrassed to be a Garland resident after Cheney’s stunt at the DART meeting.  “We live here and pay our taxes here,” she said and expressed her expectations to the council that she and DART's LGBT employees receive equal treatment.

Fink called Cheney’s action at the DART meeting “shameful.” and encouraged the council to pass an ordinance that would cover city employees.

“Be on the cutting edge and bring new business to the city,” Fink said.

Garland Mayor Douglas Athas and two councilmen spoke to the group in the council chambers when the council meeting concluded  and said the city would consider the idea of a nondiscrimination ordinance.

“We have a lot of lesbian and gay employees,” Mayor Athos said. “We would never allow that sort of discrimination.”  He said he had never heard a request from any of the city’s lesbian and gay community for a nondiscrimination ordinance. But he called the ordinance “nothing to rush into because no one’s come forward” with a complaint.

Mayor Athas, just because nobody's filed a complaint concerning anti-LGBT discrimination doesn't mean you can make the conclusion jump the discrimination isn't happening in a city the size of Garland.  And as far as your comment that no one from the Garland TBLG community has requested a nondiscrimination ordinance, I guess you weren't paying attention during that meeting when Carmarion Anderson and Lerone Landis were taking three minutes each of their valuable time to address the council.

Patti Fink told the mayor that most Fortune 500 companies have a nondiscrimination policy and look to relocate in cities that have similar policies. She said that the city may not have received any complaints, but many people looking for work may have skipped applying in suburban Garland because they have no protections.

Could Garland be the next community in the DFW Metroplex to protect its TBLG residents from discrimination?   Stay tuned to this TransGriot channel to find out.
Posted by Monica Roberts at 12:00 PM