On behalf of the nation, thank you New Jersey for handling your electoral business yesterday and sending Newark Mayor Cory Booker to Washington as your next US senator.

The rising Democratic political star entered this special election as a heavy favorite to claim the seat once held by the late Sen Frank Lautenberg and didn't disappoint.

This special election was also taking place with the background noise of the GOP instigated government shutdown, something Booker noted when he spoke to his supporters in Newark. 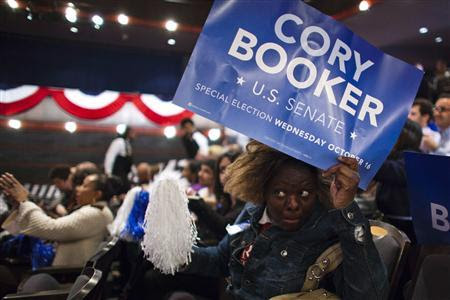 "It would have been easy to listen to this frustrating negativity and stay home today. But here in New Jersey, more than a million people rejected cynicism and came out on a Wednesday, in the middle of October, three weeks before we have another election, to fight the cynicism," he said.

"You didn't just vote, you believed that your vote and choice mattered," Senator-elect Booker said.

Once he's sworn in, it will create for only the second occasion in US history two African-American senators serving in the Senate at the same time. More importantly, it restores the 55-45 Democratic edge in the Senate at least until November 4, 2014.

Senator-elect Booker will also have to run for the seat again next year since Sen. Lautenberg's term was due to expire in 2014.

Congratulations Senator-elect Booker on a historic night for you!

Senator-elect Booker.   Gee, I love the sound of that!
Posted by Monica Roberts at 1:00 AM