2013 UH Cougar Watch-Tough Loss To Those Utah Based Cougars 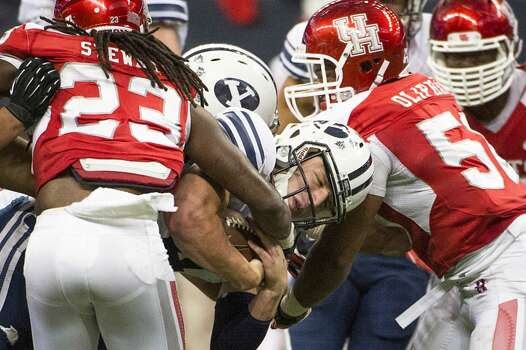 The UH Cougars didn't pay attention to the oddsmakers and got into an entertaining four hour marathon offensive shootout with BYU.

The UH Cougars scored on big plays like a 95 yard kickoff return, their first safety since 1992, a pick six interception return and touchdown receptions of 41 and 69 yards as both Cougar teams combined for 1,164 yards of total offense and BYU tied an FBS record by running 115 plays in the game.

But it was the plays that UH didn't make like the two missed Richie Leone field goals from 40 and 45 yards, the missed extra point, the failed two point conversion, the three O'Korn interceptions and 10 penalties that kept critical drives alive for BYU and led to a narrow 47-46 loss.

Instead of the expected punishing BYU ground attack they expected going into the game BYU quarterback Taysom Hill flipped the football script and came out throwing the ball for a career high 417 yards and four TD's with three interceptions.  UH quarterback John O'Korn nearly matched him with 363 yards passing and three touchdowns in a first half that was a track meet in which the longest drive for either team was three minutes.

The 38-34 halftime score favoring UH gave way to a third quarter defensive battle in which linebacker Derrick Matthews, who had three sacks along with the 29 yard pick six recorded the only point with that safety.

But it was Hill's 11 yard pass to Skyler Ridley with 1:08 remaining followed by O'Korn's killer third INT of the game by BYU's Alani Fua with 1:05 left that sealed the win for the now 5-2 Utah based Cougars and sent the UH Cougars to a frustrating first loss of the season.

The Cougars don't have time to dwell on the loss because from now on their remaining scheduled games are all AAC conference games.    Next up for my freshman and sophomore dominated squad is a Saturday trip to Piscataway, NJ to play Rutgers before they join the Big Ten next season.