Last September I wrote a post calling out feminist icon Gloria Steinem for her transphobic attitudes that were expressed in her writings of the seventies and early 80's.

It was a period when I was a teenager and college student wrestling with my own gender issues and as a Houstonian, I had a ringside seat for the 1977 National Women's Conference that took place at the old Sam Houston Coliseum downtown.

I was also a student in junior high school when Renee Richards' gender transition was blowing up as a major news story.

Translation, I grew up in the same time period that Steinem wrote those transphobic words along with the other trans-exclusionary radical feminist transphobes like Janice Raymond, Germaine Greer, Sheila Jeffreys, Robin Morgan and the late Mary Daly.

Declaring in 1977 that transsexuals "surgically mutilate their own bodies" in order to conform to a gender role that is inexorably tied to physical body parts and concludes that "feminists are right to feel uncomfortable about the need for and uses of transsexualism.", then just six years later giving a shout out to Trans Public Enemy Number One Janice Raymond in a subsequent book in which Steinem repeated the mutilation line on page 227 of Outrageous Acts and Everyday Rebellions led me to call it as I saw it in the first place.

The power of the pen and written word can and historically has been a catalyst for change.  It also cuts both ways.  The written word can either inspire people to fight for their human rights or enable negativity and hate as it did when the pen was wielded by the Raymond, Greer, Jeffreys and Daly transphobic cabal.

And I was disappointed that you could include Gloria Steinem in those ranks.

In other words, transsexuals are paying an extreme tribute to the power of sex roles. In order to set their real human personalities free, they surgically mutilate their own bodies...
Gloria Steinem- Outrageous Acts and Everyday Rebellions, 1983

So now I want to be unequivocal in my words: I believe that transgender people, including those who have transitioned, are living out real, authentic lives. Those lives should be celebrated, not questioned. Their health care decisions should be theirs and theirs alone to make. And what I wrote decades ago does not reflect what we know today as we move away from only the binary boxes of “masculine” or “feminine” and begin to live along the full human continuum of identity and expression.

I’m grateful for this opportunity to say that I’m sorry and sad if any words floating out there from the past seem to suggest anything other than support, past and present. As feminists know, power over our own minds and bodies comes first.

Steinem saying 'I'm sorry' is more than the other surviving feminist transphobes have done (or will ever do) and it's a start.  In fact Sheila Jeffreys is doubling down on her transphobic hate right now by releasing another waste of trees book attacking us.

But the trans persons who really deserve the apology are Renee Richards and all my trans elders who in the 70's and 80's were viciously forced out of lesbian and feminist spaces by people gleefully citing the poisoned words of Raymond and company and the ones you wrote co-signing them. 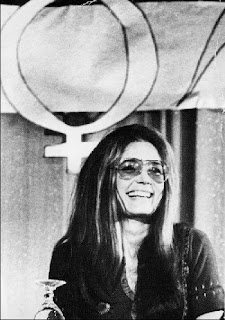 Your words during that time period had far more power and credibility because of your media coverage and status as a major feminist leader.

Because you referred to SRS surgeries multiple times as 'mutilation', it gave credibility to the 1980 paper that Raymond wrote to Congress that led to SRS being eliminated from Medicare and Medicaid coverage and the insurance company medical exclusions on trans related health care.

It co-signed the anti-trans attitudes in feminist circles that have led to the suffering and deaths of far too many trans people.  It led to trans people being cut out of desperately needed LGBT human rights legislation in the 80s, 90's and early 2k's.in many cases by lesbian identified feminists embedded in or leading Gay, Inc organizations

If you are a trans ally, and we're only learning this because you broke your silence about your previous anti-trans remarks on October 2, 2013, prove it.  Convince me and other trans skeptics to take the question mark off of trans ally as it pertains to you and replace it with an exclamation point.

Lobby with the trans community in Washington DC for a trans inclusive ENDA.  Call out the trans exclusionary radical feminists and help us get the Southern Poverty Law Center to declare them as a hate group.  Declare there is no room in feminism for anti-trans hatred and bigotry.  As a Smith alum you can help us ensure that your alma mater puts admissions policies in place that allow qualified trans feminine students to enroll there.

Ms. Steinem. we've seen your apologetic words you wrote in the Advocate op-ed.  It's your verifiable deeds from this point forward which will help the trans community determine whether they are sincere or you were selling us woof tickets and engaging in revisionist history.