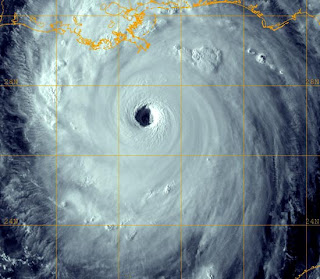 Today is the day that Hurricane Katrina made landfall in the New Orleans area in 2005.  The Category 4 hurricane submerged 80% of the city with a 20 foot storm surge, killed 1836 people and triggered the events post landfall that have had profound effects on the city of New Orleans, the region, its politics and even affected American history and culture with shows like Treme.

Hurricane Katrina triggered the largest relocation of African Americans since the Great Migration with Atlanta, Houston and Dallas becoming the biggest beneficiaries of the permanently relocated population.

Its political effects include probably being a factor in the 2006 Democratic congressional midterm landslide, resulted in Texas and Georgia picking up congressional seats and Louisiana losing one in the 2010 reapportionment, delaying Louisiana becoming a majority minority state population wise since most of the people displaced were African American, and as a consequence of losing much of that African descended population, Louisiana becoming more conservative and a reliably red state instead of the swing state it was prior to Katrina's landfall.

Since I lived in the New Orleans are for two years, I have friends in the area and my godsister still lives on the West Bank with her family, I took it very personally the failures of the Bush misadministration to aid the people of New Orleans in the aftermath of this storm.

In addition, the Katrina name was permanently retired by the World Meteorological Association from the Atlantic hurricane naming lists in 2006.

I'm not going to forget the over 1500 people in the New Orleans are who lost their lives to this storm and the others who are still trying to put their lives together years later.