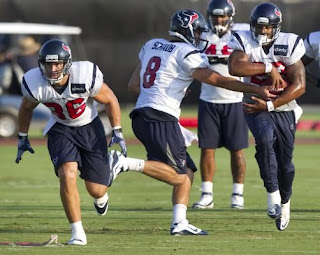 I've got my Blue Bell Homemade in the Shade ice cream and I'm parked in front of the television right now watching my favorite NFL squad take on the San Francisco 49ers.

The trash talking between me and my Bay Area friends started earlier in the week but alas, they will witness the awesome power of the Matt Schaub led Texans offense combined with Wade Phillips' fast improving 3-4 defense at Candlestick Park.

The starters will be playing three quarters tonight before giving way to the rookies on the bubble that have one last chance to impress the coaches before they cut the training camp rosters down to 75 players..

On that note, back to watching the game.
Posted by Monica Roberts at 7:00 PM