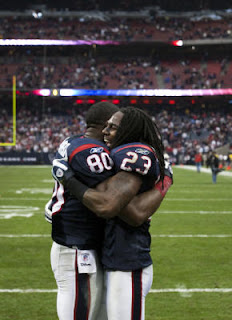 Now that Rick Perry's faith based hate rally has exited the building, Reliant Stadium can go back to fulfilling its primary function as the NFL playpen for the Houston Texans.

Hope they thoroughly desanitized the place

The Texans will be starting their tenth NFL season by kicking off their slate of 2011 preseason games with this ESPN nationally televised matchup against the New York Jets.

While we'll probably see the starters for only two series or a quarter if we're lucky, I do want to see how Wade Phillips' new 3-4 defense looks, rookie JJ Watt and how the backups are going to fit into the Texans offensive and defensive schemes.

And yeah, I'd like to see a Texans win, but I won't worry about that until September.
Posted by Monica Roberts at 7:00 PM