Yo Don, We Need To Talk- Again 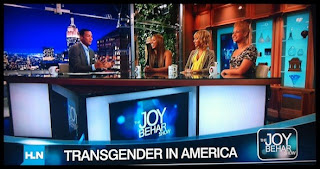 I was parked in front of the TV like most of trans America watching Don Lemon's interview on The Joy Behar Show, and I spent most of it like Janet Mock and probably countless other people around the country mumbling WTF under my breath

Here you had a panel that includes Harmony Santana, Isis King, Laverne Cox and Chaz Bono.  All are groundbreaking people with interesting storylines, and the best you can do in that air time is conduct a piss poor trans 101 level discussion?

Don, you were already on shaky ground with the trans community after that NAACP trans free panel discussion.  Now you've flubbed your second chance to change the impression that people have of you in the trans community that you're just like the other gay peeps who don't have (or don't want to have) a clue about trans people

And the fact that you're one of the few high profile out African American gay males makes this slowly ossifying impression one that concerns me as a fellow African American.

You may think America is at a Trans 101 level of discussion but I submit we're actually at Trans 201 or 202 level.  Elements of the African American community are playing catch up to get to that 201 level.

I and other transpeople of all ethnicities believe it's past time for Americans to get past their fixation on our genitalia, skip the trans makeup and trans shaving photo ops and get busy discussing our lives and how the anti-trans attitudes, transphobia, and people actively working to oppress us negatively impact them.

We can’t continue having the same conversations about trans people with a revolving door of new trans figures. We are not entertainment and our stories aren’t just for mere consumption. We must ask the hard questions beyond surgery and facial hair and ask how are they really doing now that they are in the bodies of their destinies? How are they navigating in the world?


And what will you do to help facilitate those conversations?