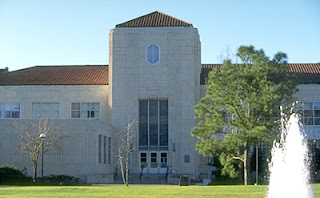 Time flies when you are waiting for an event to happen, and I've been looking forward to this day since last year's Texas Transgender Non Discrimination Summit concluded at Rice University.

Yesterday I made the short trip from home to check out the action for the 3rd annual TTNS. As you probably guessed with the heat wave and drought conditions we've been experiencing in the Lone Star State lately the heat and humidity were already smacking me in the face when I left the house so I could be strutting my statuesque behind onto the University of Houston campus and through Roy Cullen's doors by 9 AM.

It was nice and cool inside as we started gathering around Room 104 to pick up our packets and get breakfast before the event kicked off at 10:00 AM     Had a wonderful chat with Renee from HCC and deposited some flyers for the upcoming NBJC Out On The Hill Summit event next month on the information table before we were advised by the organizers to head into Room 104 and get seated.

The TTNS kicked off right on schedule with some opening remarks from Lou Weaver and a welcome from Dr. Ira Colby, the Dean of the UH Graduate College of Social Work.   In addition to expressing his happiness about the TTNS returning to campus, during his remarks gave us a synopsis on just how far the social works academic and professional community has advanced on TBLG issues since the last decade.

We were then treated to the reading of the first of two resolutions honoring the TTNS.   The first came from Texas state Rep. Garnet Coleman (D-Houston), a friend of our TBLG community. UH is is in his state legislative district.

The second came from Houston City Councilmember at large Jolanda Jones, who also happens to be a UH alum and was matriculating on the campus at the same time I was.

After the initial proclamation was read it was time for an icebreaker event conducted by UH LGBT Center Director and TTNS board member Lorraine Schroeder that was designed for us to get to know our fellow TTNS participants.

I was paired up with Jaime, Patrick, and Amanda.   We got to the business of not only introducing ourselves to each other, we were tasked to come up with a question to post on the board for everyone else in the room to ponder.

Those questions compiled in our various groups jumpstarted a very interesting and lively discussion on a wide range of trans specific issues before we moved on to the next portion of the scheduled programming.

We were paired off in groups numbered from 1-6 to take part in a trivia game that is ongoing through the event.   teams oat various intervals are randomly selected and asked GLBT trivia questions.

My Team 5 so far is has gotten our question right along with Team 4.    Just thought I'd remind you TTNS attendees about that.

After a break, it was time for our Day 1 keynote speaker Dr. Paige Schilt to take center stage along with students Siobhan Cooke and Jordan Johnson.  It was an informative multimedia presentation and case study on how gender neutral housing was achieved at Southwestern University in Georgetown,.TX .

The other cool thing about the presentation for me personally was I finally got to meet another fellow Bilerico contributor in Paige.   I had a small world moment when I discovered her father Dr. Alex Schilt, who was watching her presentation was UH chancellor when I was walking the campus. I got to meet her sister Kristen as well. .

Nikki Araguz was in the house as well along with Judge Phyllis Frye.   I also got to see LaKeia Spady, who I met at last year's event and is now studying at UH.   Also had some of my Aggie rainbow family in the house and Maria Gonzales from the Houston GLBT Caucus.

After the presentation of the second proclamation, we broke for lunch at the A.D Bruce Religion Center next door.   It's the building where we host our TDOR events in H-town, and unfortunately we are going to be reading a long list of names once again this year.

We had media in the house besides the TransGriot.   There was a cameraman from KIAH TV 39 along with a reporter from the Dallas Voice and Daniel Williams from Legislative Queery.   I relied on his blog to keep me and you informed about developments during the 2011 Texas Legislative session of importance to the rainbow community.

After lunch we returned to Roy Cullen and I had to make the difficult choice of deciding which seminar I wanted to attend and report on.   I chose Mitchell Katine's informative presentation in Room 102 of 'Recent Developments in Transgender Legal Rights'.   In addition to covering the backstory with Bowers v. Hardwick and the Lawrence v. Texas cases, the presentation covered the Texas Equal Rights Amendment, the Araguz case, and employment law.   Benjamin Ha took us through immigration law as it apples to trans people before we ended it with a question and answer session.

The other seminar that was being conducted in Room 105 was 'Creating Gay Straight Alliances' by Deb Murphy of the Montrose Counseling Center.

After a few minutes, we had to choose between two more seminars, and I decided to sit in on Dr. Kim Case and Jo Tittsworth's presentation in Room 105 covering 'Transgender Inclusion in University Non Discrimination Statements'.  Kim and Jo's session was a fast paced and humorous at times recounting of the things that were done right and the things that were done wrong in pursuing a non discrimination statement at UH-Clear Lake.

The concurrent session that was transpiring in Room 102 was one conducted by Prof. Kristen Ploeger entitled 'The Transitioning Diversity at Texas State'.

After finishing up with final housekeeping announcements for the day, the action shifted to the TG Center in Montrose for the barbecue dinner and social which featured plenty of good food and great conversation that took us well into the evening.

But as much fun as I was having, there come the time that you have to reluctantly call it a night.  I needed to get back home to compile this post while the events were still fresh on my mind and get my beauty sleep.

It was a long information filled and satisfying day as I expected it would be, and I hope that Day 2 of the Texas Transgender Non Discrimination Summit will bring more of the same when it starts in just a few short hours.

But it looks like I'll have to bring my own chocolate for the chocolate break, darn it.