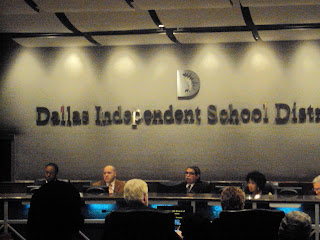 The Dallas Independent School District is the second largest school district in the Lone Star State and last night became the third in the state of Texas to protect trans students and employees from discrimination and harassment based on gender identity and expression.

There were a total of six policies on the consent agenda that needed to have the gender identity and expression language added at last night's Board of Trustees meeting in order to accomplish that.

According to a FB report from Rafael McDonnell who attended last night's DISD meeting, four of the policies in the consent agenda passed on 9-0 votes. The student nondiscrimination policy passed 8-0 with one abstention, and the teacher contract one passed 6-3.

The NO or abstention votes had nothing to do with the addition of gender identity and expression language to those policies according to McDonnell, but other issues the NO voting DISD trustees felt were problematic.


This a huge win for the civil rights of trans Texans.  At any rate Dallas transpeeps, time to thank your DISD boardmembers who did vote to protect your human rights and reward them with your votes in their next election cycles.

Now that HISD, DISD and FWISD have these trans protection policies in place, what will the rest of the over 1000 school districts in Texas do?

As always, will keep y'all posted.