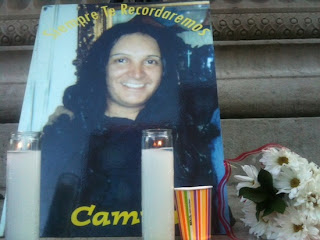 Have some good news to report in the Camila Guzman case.

25 year old Equan Southall, the reported boyfriend of Guzman for the last four months, was arrested and charged with her murder

As of yet NYPD has not reported a motive for the killing, but I'll be passing along info on this case as I receive it.

Guzman moved to the United States from Chile nine years ago in order to be able to transition, and was recently memorialized by local activists and friends outside her east Harlem home last week in a vigil organized by the Anti-Violence project.

"She came to the United States and she was herself. She lived her dreams," said M. Dru Levasseur, transgender rights attorney for Lambda Legal at the Guzman vigil. "And she should not have been killed for that."

Damn right she shouldn't have been.   May Camila receive justice for what was done to her.