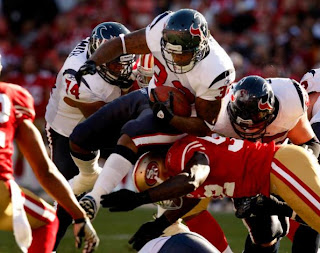 I got to watch a little Texans history as my fave NFL team rolled over the San Francisco 49ers in a Saturday preseason romp at Candlestick Park.  It was the first time ever in their ten years of NFL life they have started 3-0 in the preseason.

Yeah, yeah I know preseason games don't mean squat, and the Texans were supposed to make the playoffs last year.   Bit I'm cautiously optimistic because this is the most depth I've seen on both sides of the ball in a while and we could be in for a very special season here.

The game got off to a rough start.  The opening play of the game was a screen pass from Matt Schaub to Arian Foster that was picked off by linebacker by Ahmad Brooks.   He said thank you very much for the 13 yard early Christmas gift pick six that put the Texans in a 7-0 hole a mere nine seconds into the game.

After that Schaub and the Texans offense went to work as the improving defense pitched a shutout.  Troy Nolan picked off two passes, one of which he returned 73 yards for a TD.   The Texans defense held San Francisco to 105 total yards as the Texans rolled to a 30-7 victory that could have been worse had the offense not turned the ball over three times. 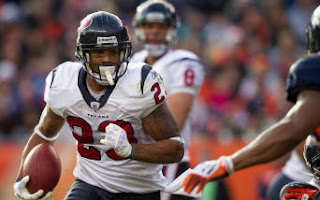 One major concern is NFL rushing champion Arian Foster tweaking his hamstring in the first quarter which makes him doubtful for the September 11 NFL opener at Reliant against the Colts.  Fortunately for the Texans they are deep at that position.

Their last preseson game is Thursday against the Minnesota Vikings, and it'll be the last chance for the bubble rookies to imprss the coaches before they cut the rosters down to 53 players.
Posted by Monica Roberts at 3:00 PM