27-14 Texans! Shoot, Save Some Of These Wins For The Regular Season 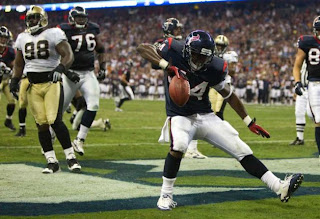 We know the preseason doesn't mean diddly in terms of won-loss record, but this 2011 Texans squad is starting to look very interesting after beating the New Orleans Saints 27-14.

Both teams played their starters for the majority of the first half and for a few minutes it looked like the Texans defense was regressing into old habits.

New Orleans ate up clock while driving the ball to a first and goal on the Texans 4 yard line.  The next play the Texans blitz Drew Brees and Antonio Smith broke through to sack Brees and force a fumble that they recover to stop the Saints drive.   The offense takes the field and cashes the turnover in for a touchdown and a early 7-0 lead they never relinquished.

All-Pro running back Arian Foster saw his first action of the preseason and rushed the ball five times on that initial drive for 47 yards and two TD's in the first quarter before he was pulled to let Ben Tate handle things in the second quarter.

And handle things he did.   The

2010 second round pick from Auburn exploded for 95 yards and a touchdown on just nine carries.

The offense as usual is looking good so far, but what about the defense you Texans fans are asking?.

Wade Phillips' new 3-4 defense is starting to look better as well.   Despite being in basic coverage all night because we have to go to the Superdome to play them when the games count in Week 3, they forced three turnovers and two fumbles.

They had one play where a safety got toasted in the second quarter on a 58 yard strike that narrowed the Texans lead to 17-14, but overall they played a good game. .

The 2-0 Texans travel to San Francisco to play the 49ers next Saturday
.  .

Posted by Monica Roberts at 1:15 AM