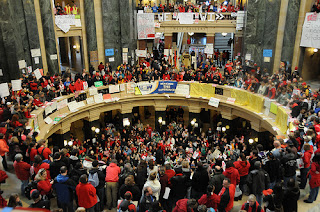 Well, the showdown day is here.    It's people power versus $40 million dollars in corporate money pumped into the recall races of six Republican state senators who were rubber stamps for Gov. Scott Walker's (R) hate on workers agenda that triggered massive protests earlier this year.  .

Fourteen Democratic senators had to flee the state in an attempt to temporarily stop it.  They drew media attention to what was going on and more importantly, got people to see that the GOP corporate agenda doesn't work for working class people.

They eventually returned to valiantly fight against the thuggish tactics the GOP majority used to pass a raft of policies the people of the state didn't want.   They lost those legislative battles, but may have won the war by shedding light on what was happening in Wisconsin and similar replication efforts going on in Republican controlled states such as Ohio, Michigan and Florida. . 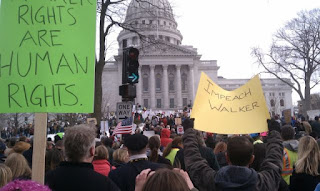 Wisconsin is also Ground Zero for this effort because it is not only the historic heart of liberal progressive policies that were replicated elsewhere, but the union movement in the United States.

Well, by the end of the day, we'll find out if the Democrats get the magic number of three seats they need to retake control of the Wisconsin state senate, give hope and renewed energy to people in Michigan and Ohio doing the same thing in their respective states and send political shockwaves through Republican controlled politicans trying to execute the same game plan elsewhere.

It's going to be fun to watch.